Parineeti Chopra shared an amazing picture of herself after a long time. Fans started pouring their love for her in the comment section. Read to know more.

Parineeti Chopra shared a scintillating picture of herself on Instagram and regardless to say, she looks stunning. She is seen sporting a pretty white lace detail crop top paired with a black flowy skirt with thigh-high slit details. Parineeti Chopra kept her look simple and opted for a nude dewy makeup look. She went for tight curls open hairdo and accessorized her whole ensemble with golden neck chain and golden bracelet.

Interestingly, Parineeti added Varun Dhawan's name in the caption when she shared the pic on her handle. Given that Varun and Parineeti share a great bond with each other and the two have also worked together in Rohit Dhawan directorial Dishoom, it is understood that this is some kind of inside joke. Varun Dhawan, who is quite active on social media and constantly keeps sharing some funny and amazing posts on the same, is also well-known among his fans for his quirky yet sarcastic caption ideas. This time he gave an interesting suggestion to his friend, Parineeti Chopra.

While Parineeti looked breathtaking in the picture, what grabbed the attention was her funny caption. She wrote in her caption that, 'Hi  ... VD @varundvn suggested a title but I can't say it.' This has left the fans curious. Fans also started pouring love for the actor and her looks soon after she posted her picture. 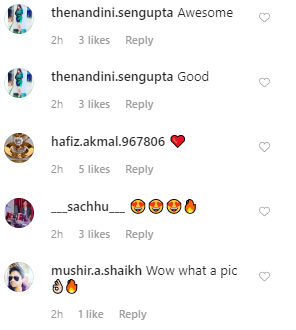 In a candid interview with a leading entertainment portal, Parineeti Chopra opened up saying that she loves to hate Varun Dhawan. She also said that they both share a love-hate relationship. Parineeti Chopra also mentioned that Varun can really be overbearing. He always wants lots of attention and wants people around him talking about him and keep seeing him.

PEOPLE HAVE PLEDGED SO FAR
Sisters Sonam Kapoor & Rhea Kapoor are 'double trouble' for Anand Ahuja
Tamannah Bhatia says people think she is 'out of work' and here's the reason
Kartik Aaryan's latest pic is proof that nothing can mess with his hair; see here
Amitabh Bachchan recites his late father's poem, reminisces cherished times in video
Times when Disha Patani's dance moves had her fans floored
DO NOT MISS
LOCKDOWN TO BE LIFTED IN PHASES?
BMC MAKES WEARING MASKS MANDATORY
DECISION ON LOCKDOWN EXTENSION
UP TO SEAL 15 DISTRICTS
CONG SINGHVI ON COVID-19 LOCKDOWN
MAN THRASHED BY MINISTER'S GOONS