Priyanka Chopra Jonas has been spending some fun time with her niece Krishna amid lockdown. Recently, the duo was seen dressing up for an English tea party.

The actor shared an Instagram story where the actor was seen sporting a beautiful flower hat with her niece. While Priyanka Chopra Jonas was seen donning a black hat with red and yellow flowers, her niece was seen wearing a white hat with pastel coloured flowers. While sharing the picture, Priyanka Chopra captioned it as, “Playing dress-up #Englishteaparty". 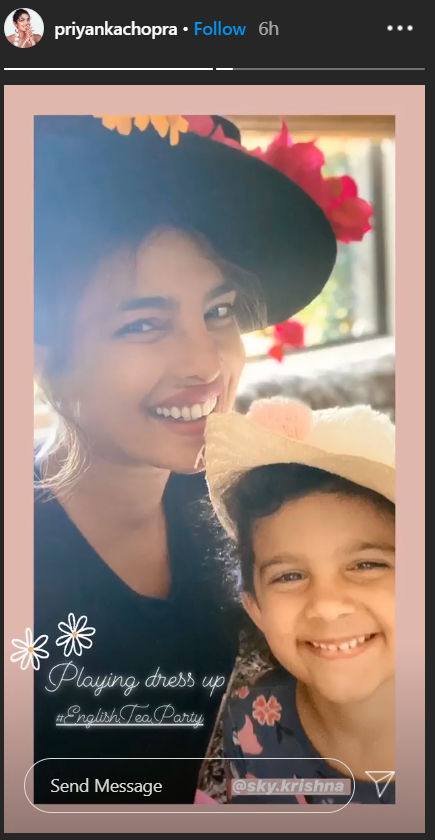 With the Coronavirus crisis prevalent in the world, all major events and gatherings around the globe have been cancelled for 2020 and that certainly includes the glamorous MET Gala hosted each year on the first Monday in the month of May. Priyanka Chopra Jonas decided to host her own fashion gala this year, while at home with family, and it's the cutest thing ever.

The Quantico star shared a glimpse of her look put together adorably by her little niece Krishna Sky Sarkisian. Priyanka Chopra tagged the little munchkin as 'Glam and Creative Director' as she shared pictures where Priyanka is crowned as the 'Pretty Pretty Princess'.

She captioned the post as, "First Monday in May. This year’s theme: Pretty Pretty Princess." The actor shared a series of three pictures where in the first picture, Priyanka Chopra Jonas is seen crowned by her niece while the other two pictures give a glimpse of Krishna giving a makeover to Priyanka Chopra Jonas.

Priyanka Chopra Jonas will be seen next in Robert Rodriguez's upcoming film We Can Be Heroes. She has been signed for the fourth installment of the Matrix franchise as well as an Amazon web series titled Citadel created by Antony and Joe Russo. She will star opposite Game Of Thrones actor Richard Madden in the show. Priyanka Chopra has also signed up to play the lead in the biopic series based on Ma Anand Sheela that will reportedly be co-produced by her.

PEOPLE HAVE PLEDGED SO FAR
LATEST NEWS
View all
11 hours ago
Throwback Thursday: Sara Ali Khan loved to pose even as child, netizens call her 'cutest'
29 mins ago
Bhumi Pednekar's outfits that can be perfect for your next brunch date; see pictures
26 mins ago
Varun Dhawan shares aesthetic scenic beauty of Mumbai's Juhu Beach; watch video
49 mins ago
Deepika Padukone's movies where she was paid more than her co-stars
5 mins ago
Alia Bhatt starrer 'Gangubai Kathiawadi' shoot to resume by third week of June?