Priyanka Chopra Recalls Her 2005 Song 'Tinka Tinka,' Says 'most Thought It Was Sung By Me'

Global icon Priyanka Chopra, who has been spending her quarantine period with singer husband Nick Jonas at her Los Angeles home, recalled some old memories.

Amid coronavirus pandemic, several Bollywood stars are recapitualting some old fond memories with several throwback pictures. Global icon Priyanka Chopra, who has been spending her quarantine period with singer husband Nick Jonas at her Los Angeles home, recalled some old memories on social media. The Sky is Pink star shared a song clip from her 2005 Hindi film Karam and also gave a brief masterclass on playback singing in Hindi films.

Remembering her Bollywood days, Priyanka reminisced how a song Tinka Tinka which was sung by playback singer Alisha Chinai was thought by people to be sung by her. Adding to it, Priyanka said that Alisha was one of her favorite playback singers and that their tones complemented each other.

While captioning the song on her Instagram page, Priyanka wrote, “Tinka Tinka’ is a song from one of my earlier films Karam (Deed). It released in 2005. For those who might not know, Hindi films use playback singers for most actors and I’ve had the fortune to have some amazing singers lend their voice to my films over the years. But when this song was released, most thought it was me...But it was the voice of one of my favorite singers @alishachinaiofficial... she complimented my tone so well. Thank you Alisha!! .. so this Thursday (sic)”

Among those who reacted to the post was designer Manish Malhotra. He wrote that the song was indeed a huge hit. Apart from the ace designer, several other fans of the actress also dropped their takes on the video. One of the users who loved the song wrote that it was a calm and peaceful song, and Priyanka’s performance complements it perfectly. Another fan said that it's his all-time favorite. Some fans complimented Priyanka’s look in the clip too. One user said: “Wow amazing looking so gorgeous and beautiful mashallah.” 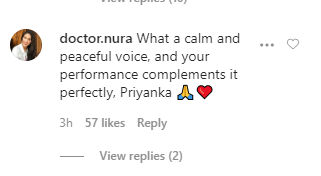 Sometime back, Priyanka Chopra shared the most amazing of her memories from last year's Cannes festival which is full of glamour. Last year was when the global star first stepped on to the red carpet of the iconic Cannes Film Festival with her husband Nick Jonas and the bridal glow from her recent marriage in December was still around. Priyanka shared a video on her Instagram page where the actress showcased her six different avatars during the festival and all of them were grabbing eyeballs at the red carpet.

PEOPLE HAVE PLEDGED SO FAR
LATEST NEWS
View all
1 hour ago
Amrita singh is singing 'tum aa gaye ho' for saif ali khan in this viral video; see here
2 hours ago
Gabriella demetriades enjoys pool time in white swimsuit as a response to 'cruel summer'
35 mins ago
Aamir khan mourns the death of hockey star balbir singh sr
2 hours ago
Riteish deshmukh thanks lata mangeshkar, says 'my father had great respect for you'
1 hour ago
Siddhant chaturvedi's reply to a comment on his instagram post wins the internet