Priyanka Chopra Jonas is currently making the most out of the self-quarantine. She is spending her time during the lockdown with husband Nick Jonas. She is also quite active on her social media and regularly posts updates about her life. As Priyanka Chopra Jonas is spending most of her time in self-quarantine with husband Nick, she received a pleasant gift from Chrissy Teigen 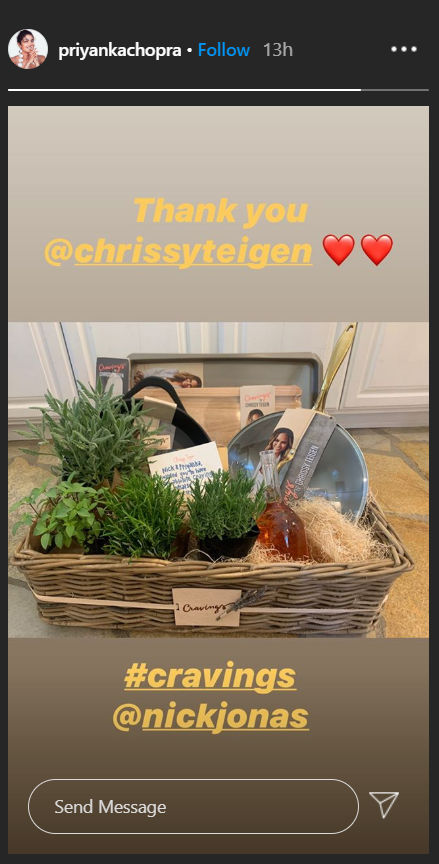 The picture of the gift basket shared by the actor has a wide variety of gift items. The gift basket consists of two large pans, some herb plants and what looks like a bottle of honey. The gift basket by Chrissy Teigen also has two large serving trays for the actor. There is also a note for Priyanka Chopra Jonas and her husband Nick Jonas in the basket.

Also Read | Priyanka Chopra Unleashes Her Goofy Side On Instagram; Pics Inside

Priyanka Chopra Jonas is currently in Los Angeles with husband Nick Jonas. She is regularly posting updates about her life on social media. Recently she posted a picture with her niece where is seen playing dress-up with her.

On the work front, Priyanka Chopra Jonas was last seen in the movie The Sky is Pink. She was seen along with Farhan Akhtar in the movie. She will be next seen in Robert Rodriguez’s upcoming project We Can Be Heroes. Other than this, the actor is also all set to feature in Netflix project The White Tiger which also features Rajkummar Rao in the lead.

According to various media reports, Priyanka Chopra Jonas is also expected to play the lead role in the biopic series based on the life of Ma Anand Sheela. The reports also state that the project will be co-produced by her.