Priyanka Chopra Takes A "big Step" In The Kitchen With THIS; Read Here

Priyanka Chopra takes to her Instagram story to share her "big step" in the kitchen with her fans. Here is what the actor did. Read on to know more about it.

Priyanka Chopra is not a good cook and the actor has herself admitted this. Recently, the global icon went to the Porte De Stella festival in Miami and tried to hone her cooking skills. On her Instagram story, Priyanka posted a video of herself and Gregory Marchand trying to make a grilled cheese sandwich and this is where Pee Cee confessed her lack of cooking skills.

In the video, Priyanka Chopra can be seen flitting around the kitchen counter trying to smear butter. As Marchand teased her, she helplessly cried out, "It's a first" referring to her cooking skills. She also added the caption, "You know me, you know I don't cook. So smearing butter was a big step". 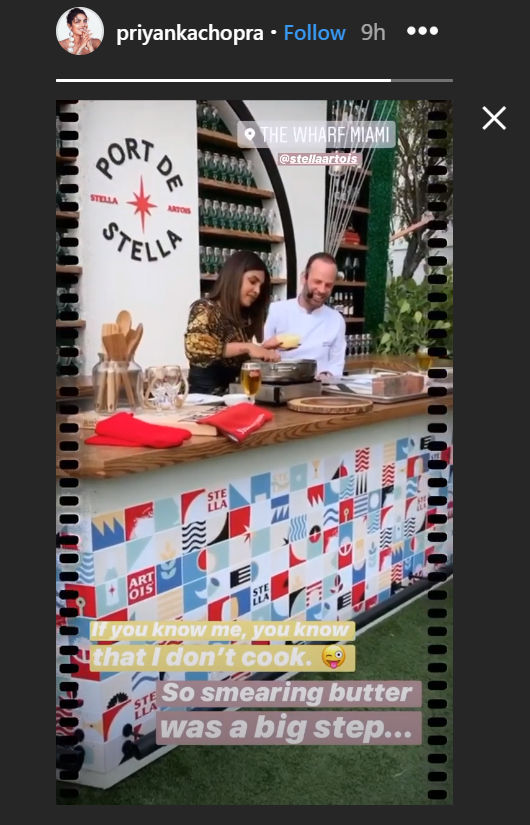 Also Read: Priyanka Chopra's Achievements That Left A Mark In The Global Platform & Made India Proud

In an interview with an international daily, Priyanka Chopra had reportedly admitted that she cannot cook. She said that she is a great hostess but she is not a great cook. She added that she believed she was "put on this earth" to appreciate food. Apparently this is something Priyanka inherited from her mother. In the interview, she went on to admit that even her mother is not a good cook. However, her father was a skilled cook as well as her brother. The latter also studied professional cooking, according to Priyanka, although he did not take it up.

Previously, Priyanka Chopra had jokingly admitted that she was a "terrible wife" if cooking was involved. The actor went on to say that when Nick Jonas had proposed she confessed to him about being a bad cook. However, it reportedly did not seem to bother Nick as he said, "It's alright babe, neither can I".

Also Read: Priyanka Chopra Avoided A Wardrobe Malfunction In Her Grammy 2020 Dress LIKE THIS