Pulkit Samrat has been dating his fellow actor Kriti Karbanda for a few months now. The two were recently spotted together enjoying seafood. See pictures. 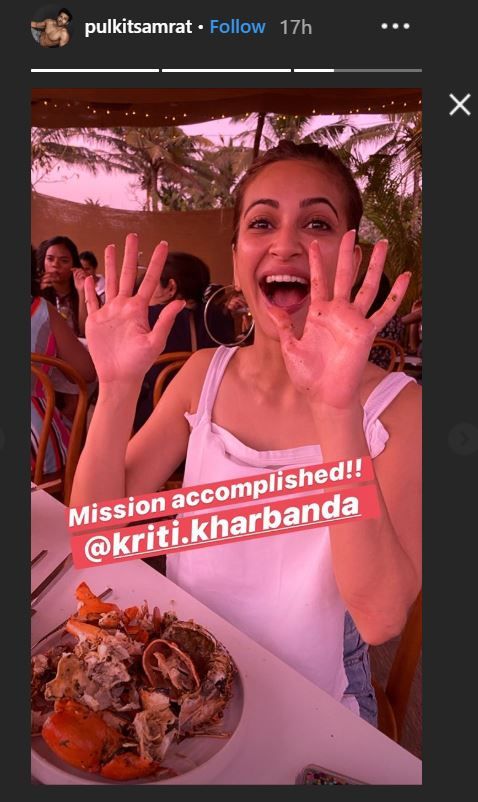 Kriti Kharbanda had her hair tied behind her head as she wore a pair of silver hoop earrings. The adorable couple is seen enjoying a meal of seafood while on their date. Pulkit Samrat posted a picture of Kriti Kharbanda on his Instagram story and mentioned that they managed to accomplish their mission of finishing the entire meal.

Pulkit Samrat sparked dating rumours after he put up a super adorable post about Kriti on her birthday. When asked previously about the media speculating that the two were dating Kriti Kharbanda had told a popular media house that her chemistry with Pulkit Samrat in the movie Pagalpanti is great and that they look great together. Kriti Kharbanda went on to say that she cannot blame the media for speculating as they look ‘hot together’.

She also said that Pulkit is very special to her and that he will always be special to her. A few months back Kriti confirmed the romance saying that she wanted to keep it under wraps and let her family know about Pulkit Samrat first. She also added that every couple takes a different amount of time to disclose their affair and that in their case, it was five months.

PEOPLE HAVE PLEDGED SO FAR
Shraddha Kapoor and Kiara Advani show how to slay white shirt tops
With '83 postponed, Jatin Sarna takes up hilarious challenges even without being nominated
Vicky Kaushal will meet his loved ones after lockdown ends, fans wonder if it is Katrina
Kareena Kapoor has this EPIC reply for her ‘Ka’ Arjun Kapoor amid the lockdown
Urvashi Rautela declares her current relationship status in a quirky way amid lockdown
DO NOT MISS
UNITE AND FIGHT CORONA: PM MODI
AIR INDIA SIGNS CONTRACT
MAHARASHTRA COVID-19 TALLY
24-HOUR CURFEW IN MECCA & MEDINA
'9000 MARKAZ CONTACTS TRACED'
FANS EXCITED FOR KOHLI-KP TALK