Pulkit Samrat recently announced that he has 'surrendered' to ladylove Kriti Kharbanda after seeing her impressive sword-wielding skills from Housefull 4.

Kriti Kharbanda recently shared a still of herself from the film Housefull 4 wherein she is pulling off a challenging sword-wielding scene. However, Kriti Kharbanda nails her sword-wielding effortlessly and also described this scene as one of the toughest yet cherished moments at work. Kriti Kharbanda also went on to say how people thought that she was too tiny and thin to even carry a sword but it seems that the Pagalpanti actor has managed to silence everyone with her sword act in the scene. Take a look at Kriti Kharbanda's post. 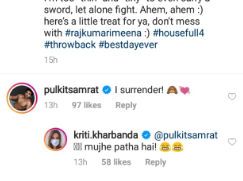 Some of the fans were also left swooning over the Pagalpanti actor's sword-wielding skills. One of the fans also left a quirky comment saying that Pulkit should be 'careful' after watching this video. Take a look at their reactions. 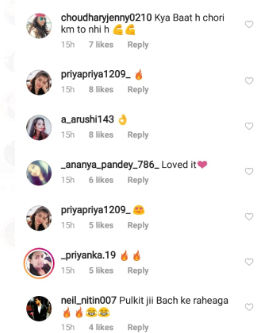 On the work front, Pulkit Samrat and Kriti Kharbanda were last seen in the movie Pagalpanti. The comedy flick also starred Anil Kapoor, Arshad Warsi and Ileana D'Cruz in pivotal roles. The film was directed by Anees Bazmee.