R Madhavan recently posted a cute photo on his Instagram where he kissed his pet bird Ashley and captioned the image by calling it 'second smooch of the day'.

R Madhavan is undoubtedly one of the most popular and acclaimed actors, who has worked in both Bollywood and Tamil cinema. While the actor was absent from the big screen in 2019, he still kept his massive fan following entertained on his social media. Recently, R Madhavan shared an amusing picture of his second "smooch of the day" on his Instagram story.

R Madhavan recently posted a picture with his pet bird, Ashley, on his Instagram story. In the picture, the 49-year-old actor shared a smooch with his feathered friend and tagged the image by writing, "My second smooch of the day," along with the wink and a grinning face emoji. Check out the picture of R Madhavan kissing his pet bird below. 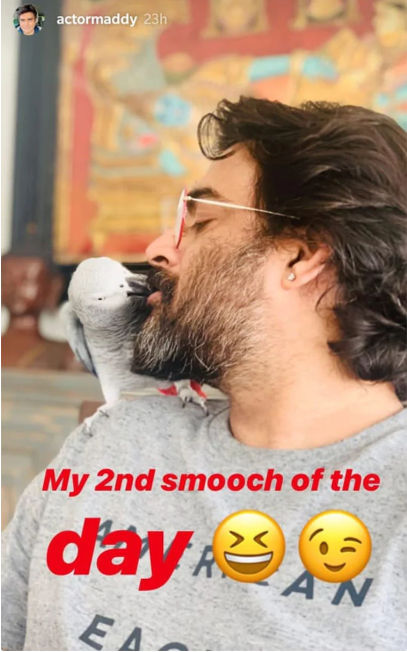 R Madhavan rescued the African grey parrot, Ashley, a few years ago in Mumbai. Since then, the actor and the bird have shared many cute moments that Madhavan has shared with his fans on social media. R Madhavan also happens to be a member of People for Ethical Treatment of Animals (PETA), which is an organisation dedicated to animal rights and safety.

When the actor was criticised for keeping the parrot at his home, he responded to his critics in an interview with a news portal. In the interview, Madhavan had stated that If he had left it out, it would have been eaten by crows. He added that the parrot was like his son and was never caged.

On the work front, R Madhavan will next be seen in the upcoming biographical drama film, Rocketry: The Nambi Effect. The film is based on the life of Nambi Narayanan, a former employee of the Indian Space Research Organisation (ISRO) who was accused of espionage. Madhavan is the writer, producer and director of the film, and Rocketry: The Nambi Effect will also mark his directorial debut. Madhavan will also essay the role of Nambi Narayanan in the upcoming movie.