Radhika Apte in an interview on Wednesday revealed the five reasons that Badlapur was a game-changing film for her. The Sriram Raghavan film has marked its fifth anniversary on February 20, 2020.

Radhika talks about '5 years of Badlapur'

Radhika Apte is considered to be one of the most promising actors in Bollywood. Critics and audience have always appreciated the Sacred Games actor for her screen presence. Apart from her Bollywood projects, Radhika has also starred in several international projects.

Radhika Apte listed her first reason as the film was directed by Sriram Raghavan. She complimented the director and called him a good director and somebody who is very well established. The second reason listed by Radhika Apte was the film being a Varun Dhawan starrer film. She deemed it an advantage for the film since Varun has a huge fan following.

Radhika Apte said that the third reason Badlapur was a game-change for her was because of the film’s good script. She further added that her role was also well written. She listed her fourth reason as her scenes being extremely tough and challenging that helped her get noticed. The Badlapur actor listed her final reason as the audience seeing her in a never before seen avatar thus adding the film as a highlight in her career.

Also read | Radhika Apte Takes A Trip Down The Memory Lane; Shares A Still From Her Debut Movie

Even Varun Dhawan took to Instagram and celebrate Badlapur's fifth anniversary. Varun Dhawan who played the lead role in the film uploaded the revenge- thriller's poster. Take a look. 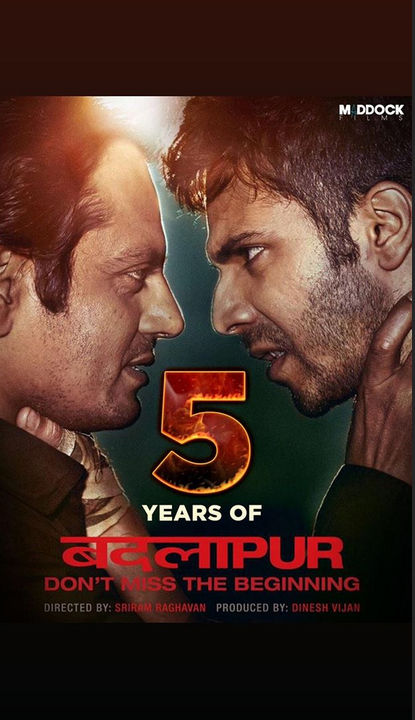