After entertaining movie buffs with her film Hichki, Rani Mukerji has returned as the daring and bold cop, Shivani Shivaji Roy, in her recently released film Mardaani 2. The film released this Friday and managed to make a mark at the box office. Fans were excited to see her daring avatar of a cop once again. Since the film received an overwhelming response from audiences and critics, Rani visited the Shirdi temple to seek blessings of Sai Baba.

Rani Mukerji visited the Sai baba temple and offered prayers. In the pictures, Rani Mukerji can be seen sporting a black and white suit. The Mardaani 2 actor can be seen getting overwhelmed with emotions while offering prayers at the Shirdi temple. In one of the photos, Rani can be seen meeting the temple administration as well. Check out the pictures here. 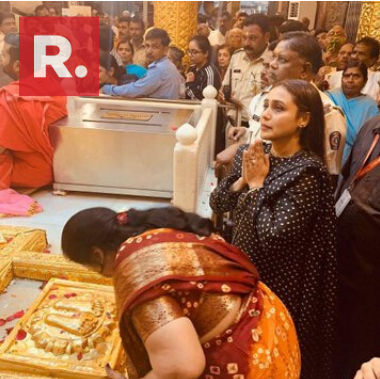 Also read | Mardaani 2 Vs Mardaani: The Sequel Works Better Than The Original, Receives A 'thumbs-up'

Mardaani 2 was directed by Gopi Puthran, the film has managed to make an impression in the minds of audiences and is the story of Shivani Shivaji Roy chasing after a serial rapist and murderer. The film is produced by Yash Raj Films. Mardaani 2 has been getting rave reviews from everyone including the celebs who attended a special screening of the same. Rani had also met police officers from different states during the promotions of the film to understand their job better. Rani Mukerji has been lauded for her stellar performance in the film. The film has been doing very well at the box office. Business analyst and movie critic, Taran Adarsh has shared the number of the box office collections on his Twitter handle, check it out.