Arjun Kapoor recently posted a picture of his mother next to his own image, showing the similarities between them. Even Ranveer Singh commented on the photos.

Arjun Kapoor has often shared touching pictures of his late mother on social media. Recently, the actor shared an old black and white photo of his mother alongside a picture of himself during his college days. The two images were posted side by side and fans immediately noted the strong similarities between mother and son. Arjun even captioned the image by writing, "same to same", followed by a heart emoji. The picture was also noted by several celebrities, including fellow actor and Arjun's good friend, Ranveer Singh, who commented on the resemblance between Arjun and his mother.

Here are the pictures that Arjun Kapoor posted on his social media just a few hours ago. The actor posted his own college days picture right beside the image of his late mother, noting that they looked the same in the caption. The post soon went viral as fans adored the cute pictures and were marvelled by the similarities between the mother and the son.

Even Ranveer Singh, one of Arjun Kapoor's best friends in the film industry, took to the comments section of the post to leave behind a message. Ranveer Singh simply wrote down, "Aila", in the comment, revealing his surprise at the stunning similarities between Arjun and his parent. Actors Siddhant Chaturvedi and Rakul Preet Singh also left behind loving messages for Arjun on the post. 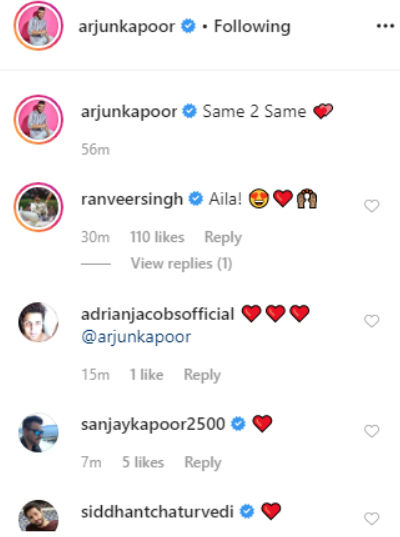 On the work front, Arjun Kapoor recently featured in the epic historical war film, Panipat. He played the role of Sadashiv Rao Bhau in the movie. The film also starred Sanjay Dutt and Kriti Sanon in prominent roles, with Sanjay playing the role of Ahmad Shah Abdali while Kriti played Parvati Bai. Panipat was directed by Ashutosh Gowariker and released on December 6, 2019.

PEOPLE HAVE PLEDGED SO FAR
Madhuri Dixit pens down a heartfelt tweet for her former co-star Tapas Paul
Ananya Panday teases fans with a "new beginning" and promises something exciting
Taapsee Pannu to be a part of remake of a German film 'Run Lola Run'; Details here
Ali Abbass Zafar's Mr India is neither a remake nor a sequel of the Anil Kapoor film
Shahid Kapoor lifts his wife Mira Rajput in his arms in this adorable throwback video
DO NOT MISS
NITISH KUMAR 'SUBSERVIENT': KISHOR
AMAR SINGH-BACHCHAN PATCH UP
TRUMP SUPERFAN APPEALS TO CENTRE
PAWAR GIVES NEW TWIST TO ELGAR CASE
MUMBAI INDIANS WISH TENDULKAR
IND TO STOP IMPORT OF THERMAL COAL