'The man with no ego', 'He is so humble', 'This actor is down to earth', 'He knows how to win hearts,' and many more such comments flooded the Internet after Ranveer Singh hugged a fan who flaunted his 'Ranveerian' tattoo. At the 'Chhapaak' screening, as the actor was exiting the premises, a fan partially pulled his t-shirt down to show him his tattoo.

The actor who was about to enter the elevator, came back to give the fan a warm hug. He also acted where he was trying to tear the fan's tee so that the tattoo could be visible.

Ranveer Singh's fan following is humungous and that's not a secret. This is not the first time when someone has gone out of their way to pay their tribute to the star.

Once a fan took to Twitter to post a picture of his boy shorts with Ranveer's caricature on it. The actor has also made his male fans drop their pants at a store launch that spread the message — 'Don't hold back.' He was also spotted partying with fans at a trance music festival in Hungary during 'Befikre' shoot.

#ranveersingh last night with this fan which had this cool tattoo. Thanks Rohit for this capture 🔥#viralbhayani @viralbhayani 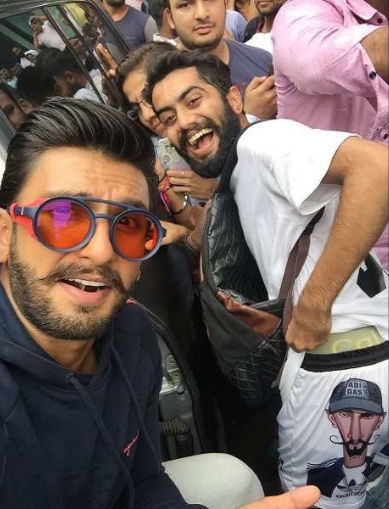 What''s next in store for Ranveer Singh?

On the professional front, Ranveer Singh is busy with Kabir Khan’s '83. The movie will also star Deepika Padukone, portraying the role of his wife in the movie. Ranveer Singh will be seen playing the character of Kapil Dev. The film will hit the theatres next year. He will also star in Karan Johar’s multi-starrer Takht. He will also be seen in Jayeshbhai Jordaar with debutant director Divyang Thakkar.