Ranveer Singh's Teenage Photo Send Fans Into A Frenzy; Compared Him With Jayeshbhai

Ranveer Singh posted a video on his Instagram handle from his childhood. Fans started comparing the actor with Jayesh Bhai Jordaar. Read more to know about it.

Ranveer Singh is always seen making the headlines for several reasons. He has starred in various movies that have been critically acclaimed and were also box office hits. Recently, he posted a photo on his official Instagram handle and fans are loving it. Read more to know about the whole story.

Ranveer Singh posted a photo on his official Instagram handle, it was his photo from childhood. He uploaded the photo on the occasion of Friday, calling it a black Friday post. In the photo, he looks very innocent, fans said. The photo is from his childhood. Within four hours of the upload, the photo garnered over 13 lakh likes from the fans. Here is the post:

Fans have reacted to the photo in various ways. Some of the fans compared the actor with Jayeshbhai Jordaar, a character from the movie by the same name, which is set to release in the year 2020. The first look of the movie was released earlier and Ranveer’s look from the movie is somewhat similar to the photo he uploaded. A fan by the Insta name Alps_ ahir said that he looks like Jignes bhai. Another fan said that he looked like Vicky Bahl. Here are the comments from the fans.

Read | Golmaal Five: Did The Comedy Starring Ajay Devgn Get A Different Title? 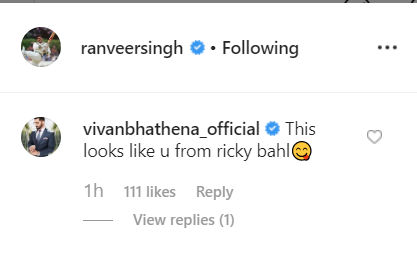 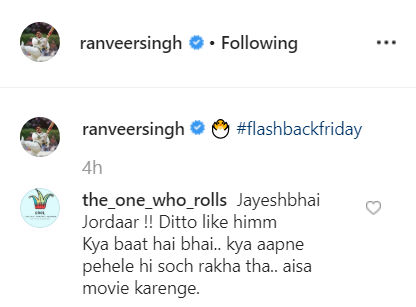 Ranveer Singh is all set to star in a comedy movie in the year 2020. It will feature Shalini Pandey in the lead role, sharing the big screen with Ranveer. The movie will be directed by Divyang Thakkar. He will also be the writer of the movie. The comedy flick will be released in Hindi, Gujarati, and Rajasthani. It will be produced under the banner of Yash Raj Films.