Bollywood actor Raveena Tandon has been enjoying a lot of her time on Instagram. From sharing her different looks to giving a glimpse into her everyday life and sharing some beauty tips, she seems to be enjoying her time on the social media platform. The Andaz Apna Apna actor recently shared her desi look on Instagram and netizens can't keep calm over how gorgeous she looked.

Raveena Tandon's desi look is too gorgeous to be true

Also Read:Raveena Tandon Opted Out Of The Film 'Darr' Due To This Reason; Read To Know More

Raveena Tandon shared her ‘desi look’ on Instagram, winning the hearts of her fans. Raveena Tandon wore a brown simple Khadi saree and paired it with a pink sleeveless blouse. The actor went for a minimal makeup look to go with her outfit. She wore large golden jhumkas, the only accessory with her outfit and completed her look with a small pink bindi. She parted her hair from the side and tied it in a small low bun. Raveena Tandon focused on highlighting her eyes with some kajal and eyeliner and finished her look with a light pink lipstick. 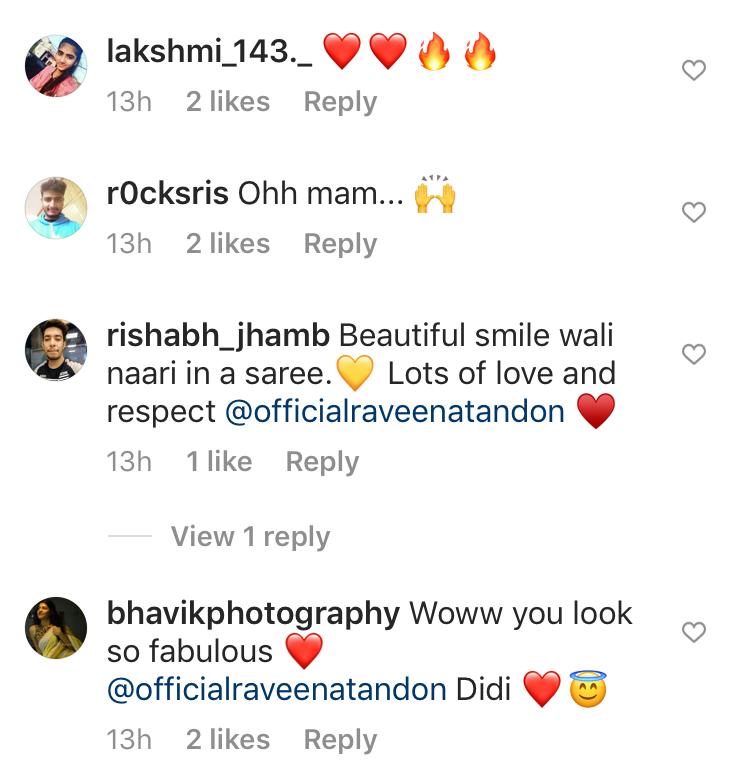 Netizens went into a frenzy over Raveena Tandon's desi look and they flooded her comment section with lovely messages for her. While many left love and heart emojis under her picture, several told her that she looked 'stunning' and 'gorgeous'. One of Raveena Tandon's fans also commented under the picture and dedicated her song Cheez Badi Hai Mast Mast to her.

On the work front, Raveena Tandon will be seen in a Kannada film K.G.F Chapter 2. Starring Yash in the lead role, the cast of the film also includes Sanjay Dutt, Srinidhi Shetty, Balakrishna and Anant Nag. The film was expected to release in October 2020, but has been delayed due to the Pandemic and Sanjay Dutt’s health issues. Raveena Tandon will be portraying a small role of Ramika Sen in the film. Ramika Sen was India’s Prime Minister in the year 1981 in the film.