Due to the unprecedented COVID-19 lockdown extension, Rhea Kapoor is missing her sister Sonam Kapoor and also time spent with her girlfriends.

Due to the unprecedented COVID-19 lockdown extension, many Bollywood celebrities have been stationed away from their family. Actor Sonam Kapoor, who returned from London before the lockdown, is currently living in Delhi with her in-laws and it seems that her sister Rhea Kapoor is missing Sonam badly as she keeps sharing family pictures on social media. Recently, Rhea Kapoor shared a picture on social media where she revealed how much she is missing hanging out with friends and spending time with her sister.

Rhea Kapoor is missing her sister Sonam and girlfriends

The ace fashion designer shared a post by one of her friends, Samyukta Nair who shared a packet of gummy candies and wrote that she is missing Rhea. Emotionally touched by this beautiful gesture, Rhea shared the post and captioned it as 'I miss my sister Sonam Kapoor and my friends too much." It's not just Rhea who is badly missing her sister, Sonam, on the other hand, is desperately waiting for the lockdown to get over so that she can meet her family back in Mumbai. 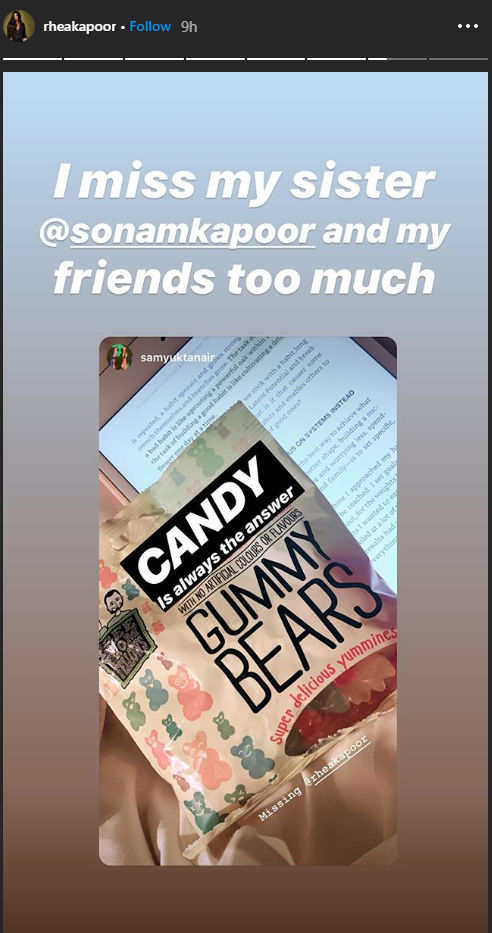 Meanwhile, on the work front, Sonam Kapoor was last seen with Dulquer Salmaan in The Zoya Factor, which is based on Anuja Chauhan's novel. The Zoya Factor is a rom-com about Zoya, an advertising agent, and her relationship with the captain of Team India, Nikhil Khoda. Helmed by Abhishek Sharma, the film also stars Sanjay Kapoor in a prominent role.

PEOPLE HAVE PLEDGED SO FAR
LATEST NEWS
View all
12 hours ago
Anurag Kashyap gets nostalgic after watching his pic with cast of his first film 'Paanch'
11 hours ago
Amitabh Bachchan helps migrant labourers by arranging transport service for them; details
11 hours ago
Pankaj Kapoor's solid net worth is a result of his illustrious career; Check details here
13 hours ago
Ali Fazal leaves an adorable comment on Richa Chadha's new profile picture
12 hours ago
Raveena Tandon wishes her parents on 54th wedding anniversary, shares throwback pics