Richa Chadha and Ali Fazal on Friday announced that they are tying the knot in April this year and now the actress can be seen flaunting her ring.

Bollywood actors Richa Chadha and Ali Fazal on Friday announced that they are tying the knot in April this year. There had been rumours about the couple planning a monsoon wedding, but the couple denied the reports earlier this month.

READ: Did Ali Fazal Ask Richa Chadha To Marry Him In Maldives? Here's What We Know

But in a statement issued by their official spokesperson last Friday, the duo shared their wedding plans. "Currently, only the date for the registration has been taken. By process, the window that is valid is for three months from the date that has been allotted." And now, a few days later, the actress was spotted flaunting her new engagement ring on social media. In a boomerang video posted on Instagram, she can be seen wearing two rings, one with a large diamond in the centre and another one with two diamonds. Take a look below- 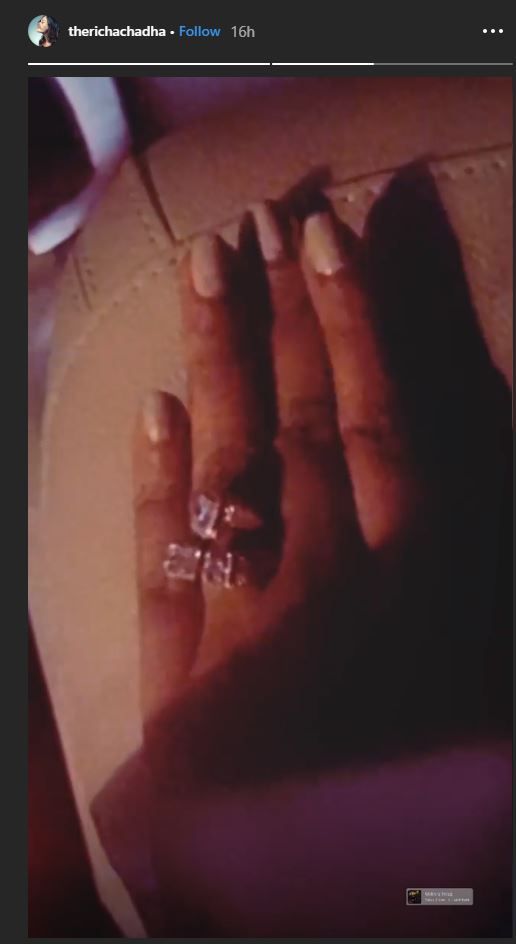 In a previous interview, when Richa was asked about marrying Ali, she stated that they do not have time to get married right now and that even if they were really talking about it, then she would not have dates.

Richa also revealed that she will be shooting a film in June. Further explaining that she and Ali are 'waiting and chilling at the moment, and are in a happy space', Richa emphasised that their relationship is a great creative partnership and no one who sees them together feels like it’s a mismatch.

Richa and Ali, who first worked together in the 2013 film Fukrey, made their relationship official in 2016. They once again reunited on screen in 2017 for the sequel Fukrey Returns. On the work front, Richa will next be seen in a love drama, while Ali's upcoming film is Hollywood mystery thriller Death On The Nile, directed by Kenneth Branagh.

READ: Richa Chadha Opens Up On Being In Relationship With Ali Fazal And Their Marriage Plans

READ:  Richa Chadha Looks Like An Ideal Sportswoman In Her First Look From 'Panga', See Pictures