Richa Chadha took to her social media and posted a cryptic caption. Fans of the star pray to God to help them make sense of the caption. Check out the post.

Due to the coronavirus pandemic, most Bollywood actors have been homebound and spending their time with their family or loved ones. Bollywood couple Richa Chadha and beau Ali Fazal are also reportedly quarantining together. While some of the couples have shared a few thoughts on their time in quarantine, Richa Chadha took a rather amusing route. It seems that the couple posted all the thoughts that they had during the time in one post.

Fans of the actors have left hilarious comments on the post. While most of them have stated that they love the pair, some are seen trying to decode the caption. One Instagram user even went on to pray to God and ask him if he could help decode the caption. Other user asked the couple to take their cat off the keyboard, hinting that a cat might’ve run over the keyboard. Check out the hilarious comments. 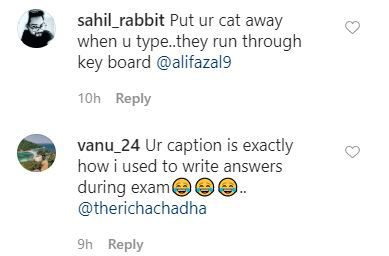 It has been reported that Richa Chadha and Ali Fazal met on the sets of their film Fukrey. The couple started dating within two years of the film. The couple has been together for about five years now. Richa Chadha often posts pictures with Ali Fazal, who is also seen posting pictures of Richa on his social media account. Richa Chadha’s close friend has revealed that the couple will tie the knot once things go back to normal. The couple has even applied for register marriage in Mumbai.

PEOPLE HAVE PLEDGED SO FAR
LATEST NEWS
View all
1 hour ago
Throwback Thursday: Sara Ali Khan loved to pose even as child, netizens call her 'cutest'
1 hour ago
Nora Fatehi's version of 'Dora The Explorer' leaves fans in splits; See video
42 mins ago
Basu Chatterjee: A legacy of slice of life films celebrating life in middle class lane
1 hour ago
Arjun Kapoor urges fans to curb use of plastic ahead of 'World Environment Day'
4 hours ago
Basu Chatterjee passes away: Amitabh Bachchan, Shabana Azmi, and others pay tribute