After Richa Chadha shared a scenic picture on her Instagram her longtime boyfriend had a lot to say but in one word. Read here and find out.

Richa Chadha and Ali Fazal’s romance is not unknown to the audiences. The two have been reportedly dating for over five years now, after they first met on the sets of the film Fukrey. Ali Fazal often calls Richa Chadha his ‘Mohabbat’, which means his love. He always posts sweet captions for his lovely girlfriend. One such latest instance was when Richa Chadha shared her breezy picture on her IG, Ali Fazal could not hold back earlier today that is on March 17, 2020, to pour his love on the pic.

In the picture, Richa Chadha is posing in front of a scenic backdrop. According to one of the hashtags in the picture, it is from Richa Chadha’s personal vacation in Bhutan. The breezy picture of Richa is a pleasant sight to see. She wore a yellow top and a high belted lower. Her hair kissed the cold breeze as she looked into the unknown. Richa Chadha’s picture is pure goals.

Also Read | Richa Chadha And Ali Fazal To Get Married Sometime In April?

Richa Chadha shared the picture on her Instagram. She wrote the caption, Breezy like social distancing 🙆🏻‍♀️”, Richa Chadha was referring to everyone to keep themselves away from large crowds. Richa Chadha’s breezy picture got her beau Ali Fazal’s attention. He poured in hearts and compliments and also called her, “Mohabbat”, once again. The picture received many comments from Richa Chadha’s followers. One fan wrote, “Aaah! How nice it is to see a smart confident beautiful woman, kudos.” More fans poured heart eyes and emojis on the picture.

Check out some reactions of Richa Chadha's photos on Instagram 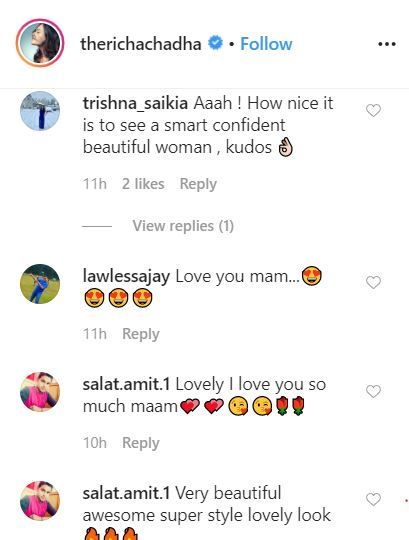 Also Read | Richa Chadha And Ali Fazal To Have A Monsoon Wedding In June? Here's What We Know

Ali Fazal and Richa Chadha have been dating for five years and according to several reports, the two might even tie the knot in June 2020. The couple does not shy away from media attention as they have attended many events together. Ali Faizal and Richa Chadha are pure #goals.