Ever since the world woke up to the sad news of veteran actor Rishi Kapoor’s demise, her daughter Riddhima Kapoor has been revisiting fond memories.

Ever since the world woke up to the sad news of veteran actor Rishi Kapoor’s demise, her daughter Riddhima Kapoor has been revisiting fond memories. Riddhima is actively sharing pictures of her childhood where she and her brother Ranbir Kapoor can be seen up to some shenanigans. Recently, Riddhima took a stroll down the memory lane and shared a few rare unseen family pictures with Rishi, mother Neetu, and brother Ranbir Kapoor from her childhood on social media.

The doting daughter who could not attend her father’s funeral reminisced her childhood days with her father and shared some throwback pictures. One of them is a family picture of them during a function. In the adorable snap, a young Ranbir is seen sitting on Rishi’s lap, Riddhima is seen sitting between Rishi and Neetu while innocently posing for the camera. Neetu has her hand under Riddhima’s chin. Another is a candid black and white picture of them at another function. A young Riddhima is seen seated between Rishi and Neetu on a chair. Ranbir is missing from the photo. In the third cute monochrome snap, a distracted but delighted Riddhima is seen looking away from the camera as father Rishi Kapoor holds her close. In the black and white pictures, Riddhima Kapoor resembles a lot like her daughter Samara Sahni. 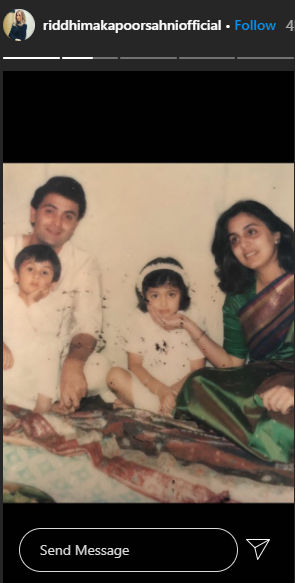 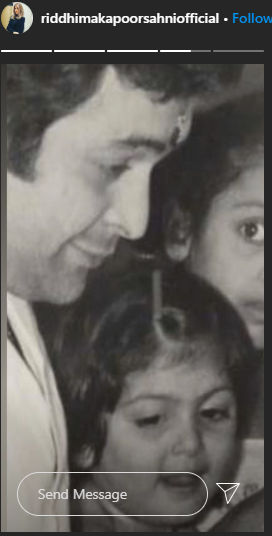 Sometime back, Riddhima had shared several other family pictures on her Instagram page which shows how she is resurfacing old fond memories. Riddhima first posted a picture of herself along with Armaan Jain, Kareena Kapoor, and others. She can be seen poking her face into the camera as Kareena sits beside her. She then shared a picture of herself along with her brother Ranbir and their Aunt Reema Jain. The three are smiling towards the camera as Ranbir Kapoor is clicking the photo.
Her last picture was with her father Rishi whom she misses a lot. In the adorable pic, her father Rishi, mother Neetu and her daughter Samara. can be seen striking a perfect picture pose. Riddhima who travelled via road to Mumbai is currently in the city with her daughter Samar Sahni.