Over the years, the Kapoor family has always been known for their phenomenal contribution towards the Indian cinema. Reminiscing old memories, late actor Rishi Kapoor’s daughter Riddhima Kapoor Sahni shared a classic old picture featuring the entire members of the Kapoor family in a single frame. Riddhima took a dig at the memory lane and shared the picture on her Instagram story where the entire Kapoor clan can be seen posing.

In the memorable snap, Raj Kapoor and his wife Krishna Raj Kapoor can be seen seated in the center along with daughters-in-law Babita and Neetu Kapoor. Kareena Kapoor and Riddhima appear to be cradled in their arms. From the picture, it's pretty unclear to guess which one is Kareena and which one is Riddhima as the two of them were babies then. Karisma, who is much older to them, takes the front row with uncles Rishi and Rajiv Kapoor. Randhir Kapoor, Shammi Kapoor and wife Neila Devi, Shashi Kapoor and his family are seen at the back. The Kapoors are all smiles for the photo, which Riddhima captioned as, “Classic,” adding a heart emoticon.

Read: Riddhima Kapoor Sahni Gets Nostalgic As She Shares Snaps Of Rishi Kapoor And Neetu Kapoor 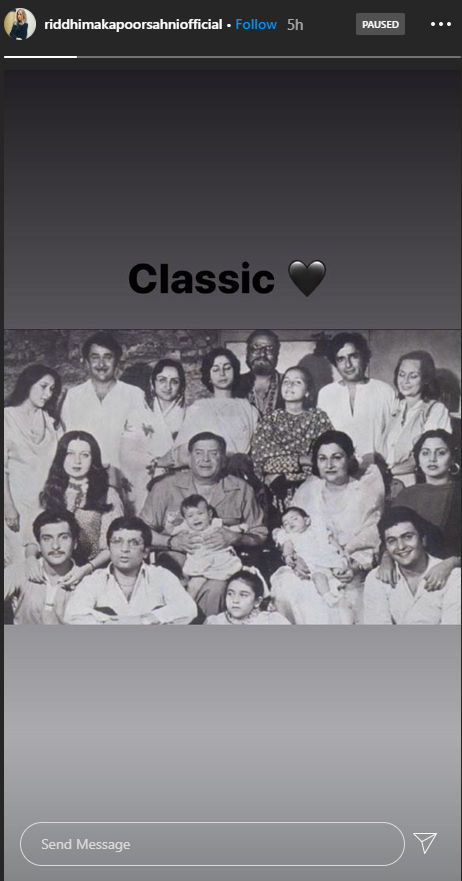 Veteran actor Rishi Kapoor breathed his last on April 30 at HN Reliance Hospital in Mumbai after battling with blood cancer for almost 2 years. He had undergone treatment for cancer in the US for about 8 months and had returned to Mumbai in September last year. Riddhima Kapoor Sahni was stuck at her house in New Delhi when the news of the actor's demise broke out and could not travel due to the restrictions imposed by the government amid lockdown. Riddhima Kapoor Sahni reached Mumbai two days after Rishi Kapoor's death after traveling by road overnight. She has been regularly updating her social media account with throwback pictures of her dear father as memories cherished with him.