Riddhima Kapoor arrived in Mumbai for the last rites of her late father Rishi Kapoor; she took to Instagram to reminiscence about her days with dad.

Riddhima Kapoor Sahani, daughter of late veteran actor Rishi Kapoor, drove down from Delhi to participate in the last rites of the actor who passed away on April 30, 2020. Riddhima has been expressing her heart-break over her father’s sudden demise through her Instagram. Riddhima, a jewellery designer by profession and home-maker, expressed her feelings once again through nostalgic pictures on her Instagram.

Riddhima Kapoor Sahani shared three pictures on her story. The first one is her click with her father. The two were huddled in for a side-hug and were all smiles in the picture. The second picture is of a young Rishi Kapoor with his mother Krishna Kapoor. Rishi Kapoor looked dapper in the second picture. The third picture is of the actor with his family. The picture included toddler Ranbir Kapoor, a young Riddhima and Rishi Kapoor’s wife Neetu Kapoor. The pictures were some never seen before clicks which bring back many memories for Riddhima. Riddhima has been very emotional and heartbroken through all this as per her Instagram posts.

Here are several stories of Riddhima with her father Rishi Kapoor 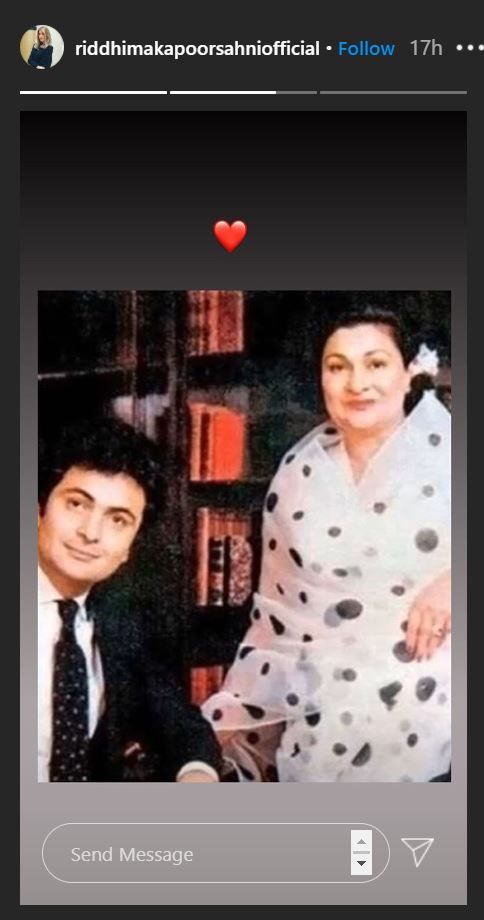 Riddhima Kapoor was still in Delhi when veteran actor and her father Rishi Kapoor succumbed to Leukemia in Mumbai's H N Reliance Foundation Hospital. She posted an emotional caption alongside her picture with him. The father-daughter duo were all smiles in the picture shared on her Instagram.

Here is the picture:

Also Read | Rishi Kapoor's Death:Daughter Riddhima Kapoor Wishes She 'could Be There To Say Goodbye'

PEOPLE HAVE PLEDGED SO FAR
LATEST NEWS
View all
10 hours ago
Unseen pic of the day: Sara Ali Khan is busy with her phone as Imtiaz Ali looks on
12 hours ago
Lisa Haydon flaunts sunburn after hiking at a scenic spot in Hong Kong; See pic inside
13 hours ago
Sanjay Dutt expresses love for mom Nargis in lovely tribute on her 91st birth anniversary
11 hours ago
'Man isn't a season, yet he changes': Anupam Kher ponders over the nature of change; Watch
11 hours ago
Raveena Tandon compares her latest pic alongside Sonali Bendre with poster of 'Keemat'