Riteish Deshmukh shares a rib-tickling video of head walk. However, Riteish's fans have a different demand from the actor. Read on to know more about it.

Seems like Riteish Deshmukh is quite consistent in entertaining fans with his funny videos. The actor recently shared another video where he did a ‘head walk’ for his fans. Check out the video to see how Riteish Deshmukh turns magician amid lockdown.

In this TikTok video, Riteish Deshmukh is seen climbing stairs and coming in front of the camera. The actor then leans down and puts his head on the railing of the stairs. Then his head is seen rolling down from the railing of the stairs. He is seen sporting the bald look that he revealed in one of his previous videos. The actor captioned the video, “Fun in the times of corona. #headwalks”. When the actor shared the video on his Instagram handle, his fans flooded the comment section asking him to stop using the application TikTok.  One of the users commented, "Sirji TikTok use na karo", while another went on to ask the same thing in Marathi. 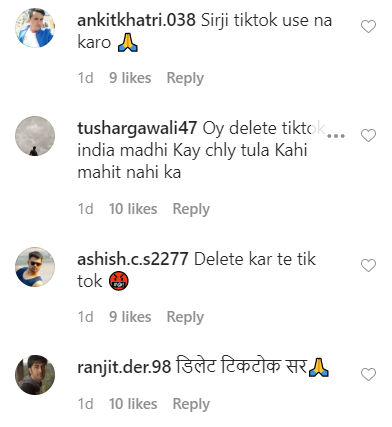 Riteish Deshmukh is known for posting hilarious videos on his official social media handles. Amidst the lockdown, fans are getting more and more content out of the Marathi-speaking actor. He has been spending time doing work around the house. In one of the videos he posted previously, viewers can see that a fan asks him to tell her a joke.

He giggles and is not willing to tell the joke but the fan pushes him to do so. He then says, "Listen, I am a celebrity..." and the fan starts to laugh out loud. This leaves a very shocked and funny reaction on Deshmukh's face. This video can be found on his TikTok as well as the Instagram handle. He is also making sure to keep himself fit amid lockdown as he recently uploaded a picture with his wife where he was seen working out with her.

On the work front, Riteish Deshmukh was last seen in Baaghi 3 along with Tiger Shroff. It is an action thriller film directed by Ahmed Khan. It is also the third installment of the Baaghi film series and was praised by the fans. However, it did not perform well at the box-office.

PEOPLE HAVE PLEDGED SO FAR
LATEST NEWS
View all
28 mins ago
Kenny sebastian recreates popular songs and they are bound to get stuck in your head
40 mins ago
Deepika padukone crashes her 'baby' ranveer singh's live session with sunil chhetri
16 mins ago
Kareena kapoor khan and gwyneth paltrow in similar cutout dress; see pics
57 mins ago
Malaika arora or amrita arora: who styled red wedding ensemble better?
56 mins ago
Sonakshi sinha's photos that capture scenic view of the sky