Saif Ali Khan talked about his role in Tanhaji: The Unsung Warrior in an interview and now his description is turning out to be true in the film's new BTS video

Tanhaji: The Unsung Warrior is days away from its release and now the team of the film released a BTS video from the sets of the film. In the video, the making of enormous sets of the film and all the efforts that went into making them seem realistic has been explained. But more than the sets, Saif Ali Khan’s crazy look is getting major attention in one of the BTS shots. Read on to know more details about this story.

Saif Ali Khan and Ajay Devgn are currently on a promotional tour for the film. Tanhaji: The Unsung Warrior is set to release on January 120th, 2020. Now, days before its release, Saif Ali Khan described his character in detail in an interview. In this interview with a media portal, Saif Ali Khan said that his Udaybhan Rathod is a "crazy baddie".

Also read | Saif Ali Khan Comments On CAA: 'I Am Still Trying To Form An Opinion On The Subject'

He further explained in the interview that the team of Tanhaji: The Unsung Warrior came up with the background for his character. He found this background development to be quite "nuts". He also said that he does not want to dish out any spoilers, but Udaybhan Rathod’s background in the film is quite colourful and a little unhinged. He also added that he had fun while playing a character that is difficult and a bit "mad".

But now, a BTS video shared by the makers of Tanhaji: The Unsung Warrior confirms Saif Ali Khan’s description of his character. In this BTS video, the entire process of the film right from its research to set development and building is explained. But one of the video’s scenes presents Saif Ali Khan directly breaking the 4th wall and staring directly into the camera. Saif Ali Khan is in his character’s get up and is sporting what he described to be a “mad” look. Take a look at this BTS video shot and the entire BTS video of Tanhaji: The Unsung Warrior here. 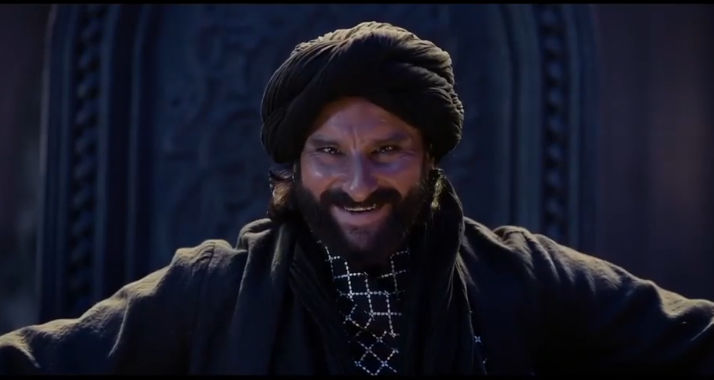 Also read | Saif Ali Khan Movies To Look Out For In 2020: 'Jawaani Jaaneman' To 'Bhoot Police'

PEOPLE HAVE PLEDGED SO FAR
LATEST NEWS
View all
12 hours ago
'Proud of all 3 of you': Anil Kapoor celebrates 2 years of 'Bhavesh Joshi' & 'Veere Di...'
13 hours ago
Huma Qureshi feels 'tops of the pops' with 108 Suryanamaskars, shares way to make money
12 hours ago
Unseen pic of the day: Sara Ali Khan is busy with her phone as Imtiaz Ali looks on
44 mins ago
Deepika Padukone's throwback yoga photo will give you fitness goals
1 hour ago
Arjun Kapoor's ‘Shake Your Bootiya’: What went into making of the song