Salman Khan is currently quarantining at his lavish farmhouse in Panvel. The actor is accompanied by a few of his family members including sisters Arpita and Alvira. Additionally, Salman Khan’s Kick co-star Jacqueline Fernandez, rumoured girlfriend Iulia Vantur and former Bigg Boss contestant Niketan Madhok are giving him company as well.

Salman Khan has been sharing regular updates during this lockdown period through his social media. Former Bigg Boss contestant, Niketan Madhok recently took to social media to share a picture of himself with Salman Khan. In the picture, both the guys are seen looking sideways. Madhok hilariously even captioned the picture as, “Will also show you what we are looking at...”.

Both the boys looked dapper as they posed for the camera. Salman Khan was dressed in a classic black t-shirt and a black cap. On the other hand, Niketan Madhok was wearing a green polo t-shirt and a cap. 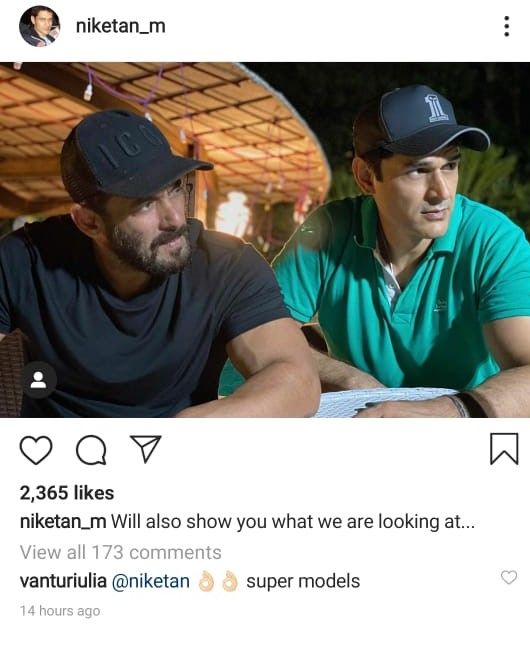 A few days ago, Salman Khan had shared a video of him sending out essential food items to the underprivileged. The video showed Jacqueline Fernandez, Waluscha De Sousa, Iulia Vantur and several others lining up as they loaded the food items onto a truck. Previously, Salman Khan had also provided monetary help to numerous daily wage workers who were hit by the coronavirus lockdown.