Salman Khan’s Fan Go To An Extreme To Meet The 'Dabangg' Star In Guwahati; Read

Salman Khan is one of those celebrities who is often surrounded by fans. This time, too, a fan did something unusual for his favourite star. Read more to know.

Bollywood is known to create a special place in the heart of its audience especially its celebrities. Fans have time and again gone to extreme limits just to meet their favourite celebrities. Salman Khan is one of these celebrities for whom fans have done some extreme things just to get a glimpse of him.

A fan of Salman Khan from Tinsukia, Assam covered a distance of over 600 kilometers on his cycle to meet his favourite Bollywood star. Bhupen Likson who is a cyclist from Tinsukia started his journey from his native town on February 8, 2020, and reached Guwahati on February 13 to meet the actor.

According to reports by ANI, this 52-year old cyclist, when asked about his journey, said that he started his journey from Jagun, Tinsukia on February 8, 2020, on a cycle to meet Salman Khan who will be in Guwahati for Filmfare Awards. The Filmfare awards would be held in Guwahati on February 15.

Bhupen Tinsukia had made several records in cycling. He has registered his name in the India Book of Records for cycling 48 kilometers in 60 minutes without touching the handle, as per reports. 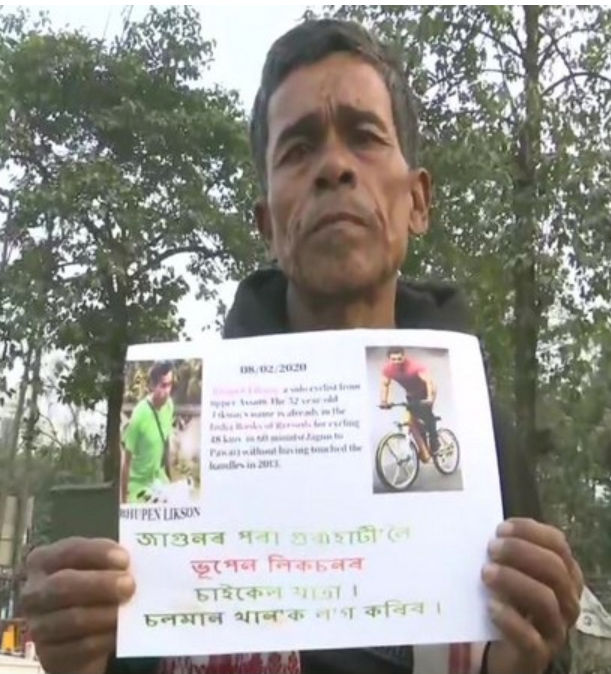 For the unversed, Salman Khan was last seen in the movie Dabangg 3. It was the third installment of the famous franchise Dabangg. The actor essayed his famous role of Chulbul Pandey who is a cop. Salman Khan was featured alongside Sonakshi Sinha in the movie.

The actor is currently busy shooting for his upcoming movie Radhe: Your Most Wanted Bhai. The movie is helmed by Prabhudeva and also features Disha Patani and Randeep Hooda in pivotal roles.