Salman Khan, B-town's Bhaijaan enjoys a massive fan following throughout the country and even worldwide. Recently an old picture took the internet by storm.

Salman Khan who is known as Bollywood's Bhaijaan enjoys a huge amount of fan following throughout the country and even worldwide. With every picture and new film release, he creates a social media frenzy and as of now, this throwback picture of the Bharat star is doing rounds on the internet. Dressed in a long-sleeved brown tee with distressed denim and a stylish cap, Salman Khan's unrecognisable picture has left users mildly surprised as the actor seems like he has lost some weight. Take a look below-

READ: Salman Khan Made A Special Appearance In A Punjabi Song After His Bollywood Debut; See 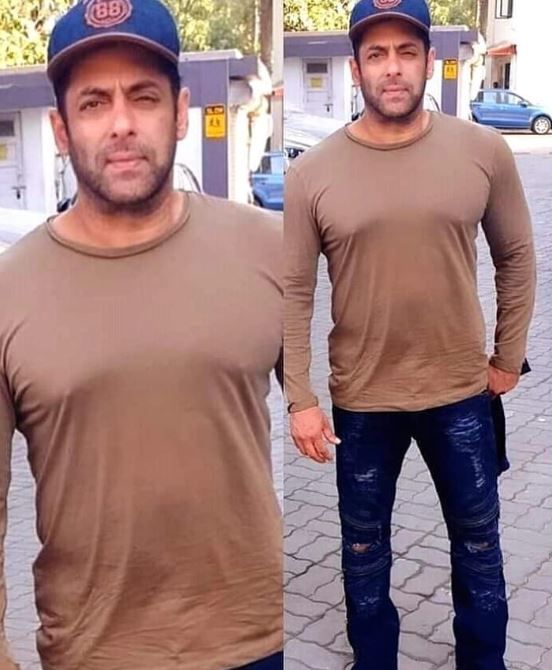 Previously, in the morning, another throwback picture surfaced wherein Salman is seen sitting inside a flight and checking his phone. Dressed impeccably in his T-shirt and ripped jeans, the actor looks dapper as ever.

On the work front, Salman will next be seen in Radhe: Your Most Wanted Bhai. He will be seen reuniting with his Bharat co-star Disha Patani in the film. Being directed by Prabhudheva, the movie also features Randeep Hooda, Jackie Shroff amongst others. It is slated for an Eid release this year. In the film, Salman Khan will once again take on the role of a cop. In a recent interview with an entertainment portal, Disha Patani stated that she was ecstatic about working with Salman Khan once again. She also added that she loved the script for Radhe and felt like working with Salman Khan was a joy.

Apart from this, the actor has also announced yet another film titled, ‘Kabhi Eid Kabhi Diwali’. The makers of the film have roped in Pooja Hegde as the lead actress for the film.

READ: 'Radhe' To Be The Shortest Film Of Salman Khan's Career?