Saqib Saleem posted a heartfelt note in which he expressed his gratitude towards makers of his film 'Mujhse Fraaandship Karoge'. Read further to know more.

Saqib Saleem recently extended his heartfelt gratitude as his film Mujhse Fraaandship Karoge completed nine years. The actor poured his heart out in the note that he posted on his feed. He thanked the people he worked with and showed his gratitude for being part of the film. The actor also specially mentioned a number of people and wrote about his thoughts upon seeing his name for the first time on the big screen.

Saqib Saleem started off by mentioning that today (October 14) happens to be a rather special day for him. He added that it was today that his journey as a hero began with his film Mujhse Fraandship Karoge. He then went on to remark that the journey since his first film has completed nine years and his life has never been the same ever since that happened. He also added that his life took a full 360-degree turn after the film was first released.

Saqib Saleem said that the film’s success made him a star and turned him from an ordinary Delhi boy into a big hero. Saqib then said that in the nine years that he has worked in the industry, he has faced a number of highs and lows. However, he has enjoyed the ride and called it exciting to be part of the journey he is in. He also said that it is the journey that made him evolve and thus it also made him quite solid. He then went on to thank the makers of the film for launching him. 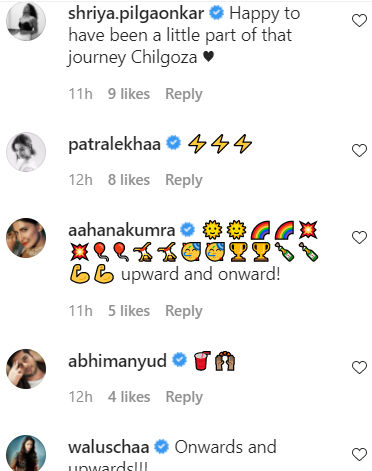 He also spoke about the first time he saw his name on the big screen. Saqib Saleem added that he was completely teary-eyed when he saw his name appear for the first time besides a big banner film name. Saqib recalled that upon seeing his name, he was crying and just couldn’t stop out of pure joy. He then continued to thank the rest of the cast and crew affiliated with the film and asked Shanoo Sharma to not post a particular dancing video of him, jovially.