India marked its 71st Republic Day this Sunday, honouring the historic date with a parade showcasing its cultural heritage, strength and development projects. While the day was celebrated with great fervour all across the country, Bollywood celebrities too took to social media to wish their fans on the special day. Ranveer Singh also took to his Instagram handle to share his picture with a backdrop which reflected the colours of our national flag and wished a 'Happy Republic Day' to the country. The actor donned a blue blazer which fans believed was a look from his upcoming film '83. While his fans flooded the comments with their love and wishes, it seemed like Sara Ali Khan was also waiting for a post from her Simmba co-star as she was pretty quick to comment. She sated that 'she was solemnly waiting for this'. 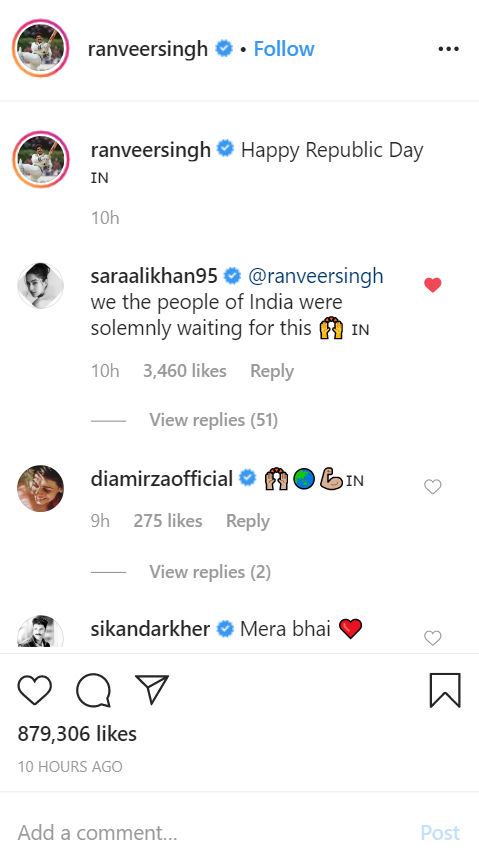 Also Read | Priyanka Chopra To Sara Ali Khan: Here Are The Best-dressed Celebs Of The Week

Sara Ali Khan and Ranveer Singh, who were last seen together in Simmba, are known to be good friends. The two were seen bonding like best buddies when last spotted together at the red carpet event of an Award show in 2019 where they also performed together for the paparazzi. Their film Simmba was a big success at the box office, becoming the third highest-grosser of 2018.

Meanwhile, on the professional front, Ranveer Singh is set to hit the big screen with his sports-drama film ‘83 on April 10, 2020. The movie is based on the real account of India’s World Cup win in 1983 and stars Deepika Padukone alongside him. As for Sara Ali Khan, she will be next seen in David Dhawan's Coolie No 1 remake, which co-stars Varun Dhawan and releases on May 1, 2020. The actor is currently busy promoting the Imtiaz Ali film Love Aaj Kal which also stars Kartik Aaryan and Randeep Hooda in pivotal roles. The film is set to hit the theatres  on February 14.