Sara Ali Khan was recently left stunned and embarrassed when her fans interrupted her with 'Sartik' chants at a promotional event. Read on to know the story.

Sara Ali Khan recently suffered some major embarrassment and confusion during a promotional event. This embarrassment was caused due to some of Sara’s fans when they started chanting “Sartik” while Sara was talking about her mother. Read on to know more details about this incident.

Sara embarrassed due to “Sartik”

If you are not aware of this, the dating rumours between Kartik Aaryan and Sara Ali Khan started doing the rounds went Sara said on Karan Johar’s show that she wants to date Kartik. Since then, both Sara Ali Khan and Kartik Aaryan have gone on to meet at award functions and also star in Love Aaj Kal. Fans of Sara and Kartik have this rumoured couple a ship name i.e. Sartik.

But recently, during a promotional event, this ship name left Sara Ali Khan a bit confused and embarrassed. During this particular promotional event, Sara Ali Khan was talking about her mother actor Amrita Singh and how she inspires her in so many ways. But Sara was interrupted by her fans when they started chanting “Sartik” in the middle of her discussing her mother and her accomplishments. Take a look.

This video since then has gone viral. The comment section of this fan club’s video has since then flooded with people calling this incident disrespectful and rude. Take a look at some of these comments. 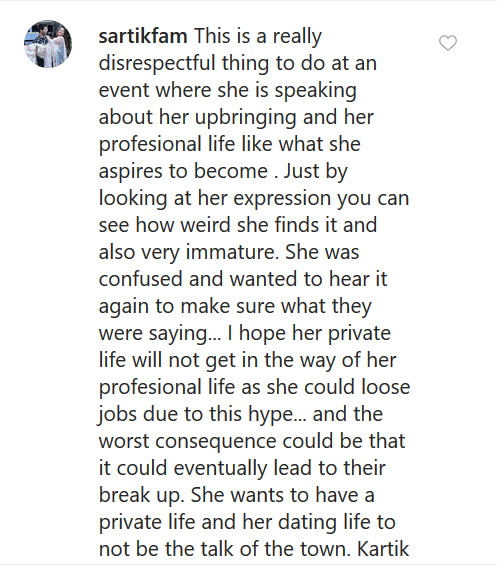 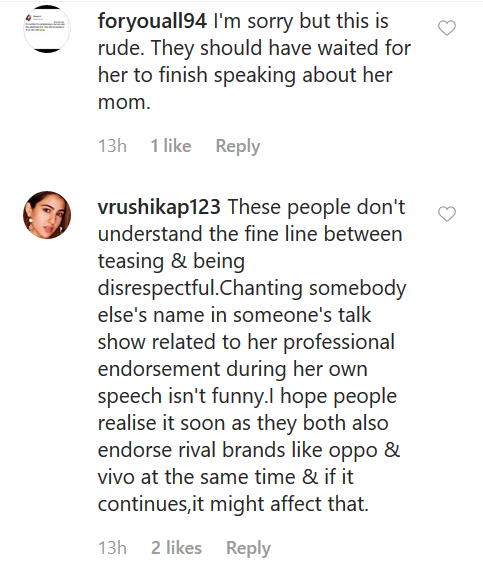