Sara Ali Khan was recently spotted in Andheri where she interacted with the paparazzi. Check out the video where she sweetly responds to the media personnel.

Kedarnath actor Sara Ali Khan has been vacationing with her mother and her brother in the tropical Maldives. However, the star is back in India and has transformed for a white ‘Jalpari’ to traditional Indian beauty.

She was seen interacting with the media recently. Sara won many hearts as she spoke to the paparazzi’s in a warm as well as a kind way. Sara was spotted in Andheri when she interacted with the paparazzi. Check out the video here.

The actor was spotted outside filmmaker Anand L Rai’s office in Andheri. The upcoming promising actor wore a white coloured salwar kameez and a matching dupatta. She wore similar coloured footwear and accessorised the outfit with some golden coloured bangles. She had her hair pulled back in a loose ponytail. She smiled at the camera and thanked the paparazzi as well. 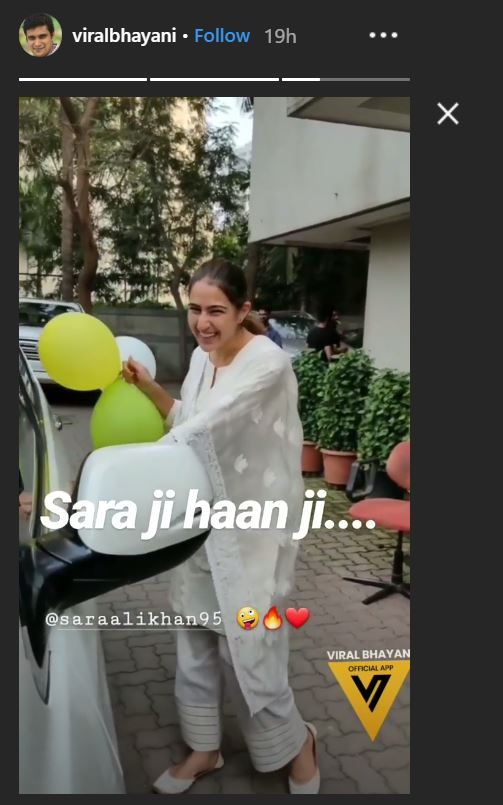 She returned with a bunch of balloons in her hands while a paparazzi asked her about her vacation in the Maldives. She replied that she enjoyed the vacation. She even played with the balloons for a bit.

When Sara Ali Khan was getting inside her car, a paparazzi in a sing-song voice called out to her. Much to everyone’s delight, Sara replied with a sweet ‘haanjii’ in the same sing-song tone.

Sara Ali Khan will be seen in the much-awaited sequel of Love Aaj Kal, titled Aj Kal. In the Imtiaz Ali directed movie, she will be seen opposite Pati Patni Aur Woh star Kartik Aaryan. She will also be seen in opposite Varun Dhawan in the remake of the Govinda film Coolie No. 1. She is considered to be one of the most promising upcoming actors of the Bollywood industry.

ALSO READ: Sara Ali Khan Proves That She Is A Water Baby In These Pictures

PEOPLE HAVE PLEDGED SO FAR
LATEST NEWS
View all
39 mins ago
Anushka Sharma glows in sun-kissed pic; says 'I know all sunlight spots of my home'
10 mins ago
Kajol's latest post is a throwback to her 'Dilwale Dulhania Le Jayenge' days; See pic
1 hour ago
Tahira Kashyap opens up about directing Ayushmann, says she needs to 'earn a position'
44 mins ago
Salman Khan's most memorable movie songs sung by Sonu Nigam; See list
15 mins ago
Ilaiyaraaja's top music compositions in Bollywood that fans must listen