Sara Ali Khan along with her mother, Amrita Singh, recently visited the Kashi Vishwanath temple in Varanasi. The actor received mixed reactions for her visit.

Sara Ali Khan along with her mother Amrita Singh recently visited the Kashi Vishwanath temple in Varanasi where she was seen performing the Ganga Arti on Sunday. Sara Ali Khan shared pictures on her social media handle to give fans a glimpse of her visit.

However, and almost predictably, following Sara’s visit, the Kashi Vikas Samiti raised an objection stating that they did not approve of her visit as she is a ‘non-Hindu.’ The secretary of the Samiti said that Sara Ali Khan’s visit to the Kashi Vishwanath temple is “against the traditions and established norms.”

He also said that the entry of the actor raises questions on the security because there is a board outside the temple that read “entry for ‘non-Hindus’ is prohibited.”

It was also reported that the pandits from the Kashi Vishwanath temple are upset with Sara’s visit. A pandit said that they appreciated Sara’s interest in Hindu traditions and religion but he said that the facts will not change that she is a Muslim.

He also said that she should have not participated in the rituals. Another pandit reportedly defended Sara Ali Khan saying that she was not alone and was accompanied by her mother who is a Hindu.

As soon as Sara Ali Khan posted the video of her visit to Varanasi, she took fans on a tour showing them the local shops near the temple and much more. Fans gave mixed reactions to the video while some were in favour of the actor while some weren’t. Check out a few comments on Sara Ali Khan’s post. 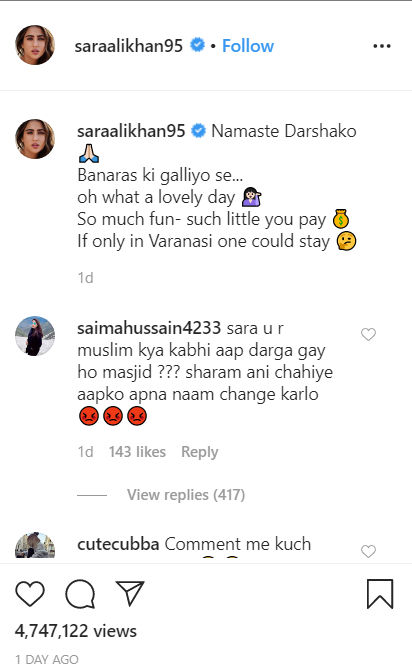 PEOPLE HAVE PLEDGED SO FAR
Kriti Sanon, Taapsee and Janhvi share posts of sibling bonds like never before
Kiara Advani's 'quarantine party look' is all about dressing up right for video calls
Urvashi Rautela reveals that she is in an 'Isolationship'; see post
Throwback: When Raveena Tandon's impromptu New York jig left her daughter bemused; Watch
Hrithik Roshan's customised Mercedes-Benz V-class oozes luxury and refinement
DO NOT MISS
COVID: LALU YADAV TO REMAIN IN JAIL
COVID-19: UK BASED DOCTOR ON PPE
TRUMP TEARS INTO CHINA-CENTRIC WHO
DORSEY PLEDGES $1 BILLION
CONG SINGHVI ON COVID-19 LOCKDOWN
PIERS MORGAN: WHO IS RUNNING UK?