Sara Ali Khan penned an emotional note on the first anniversary of her debut film Kedarnath. She also shared some unseen BTS photos from the sets of the film

Saif Ali Khan's daughter Sara Ali Khan marked her debut in 2018. Sharing screen space with Sushant Singh Rajput in Kedarnath, she mesmerised the audience and fans with her appearance in the film. Even before the release of the romantic-drama, she gained a massive fan following. The actor always expresses her gratitude towards the projects she works on. 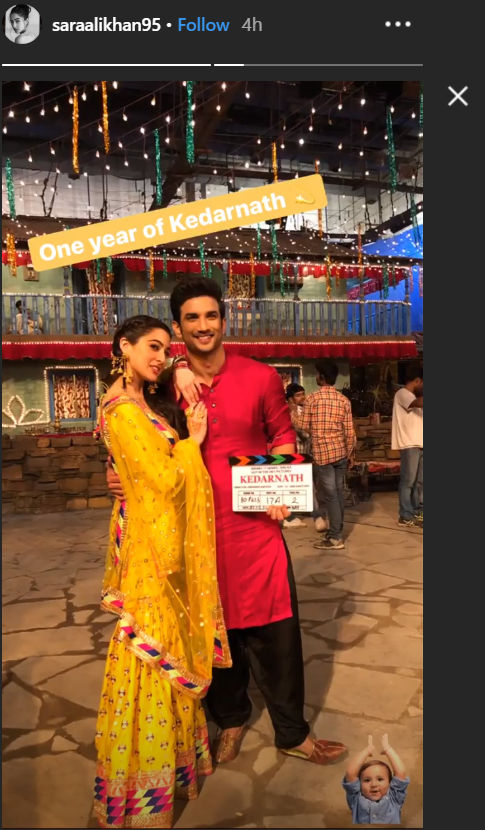 READ | Sara Ali Khan-Dhanush To Be Leads In Aanand L Rai's Next Film With Bigwigs?

She recently wrote a thankyou note to the Kedarnath team as the film completes a year in Bollywood. Along with which, she also shared a couple of BTS photos from the sets of her debut film.

As part of her caption, she wrote, "I can’t believe it’s been a year since everyone met Mukku for the first time. Kedarnath has been and will always remain an integral part of me. 👥Thank you @gattukapoor and @kanika.d for making me meet, imbibe and portray Mukku 🙏🏻 @sushantsinghrajput I truly appreciate all that you did to support me and help me consistently throughout this journey, I couldn’t have asked for a better Pithoo to carry me through all of this! Thank you Tushar Sir for shooting this film with so much love 💓 @jehanhanda thank you for constantly having your eyes on me and always having my back 🤗 And thank you to all the people that have accepted me, given me so much love and allowed me to be a humble part of the Indian film industry for a year now! 🎥 🎞 🍿 #jaibholenath". Look at the glimpses from sets below:

The Simmba actor is currently busy shooting for her upcoming film Coolie No. 1 with actor Varun Dhawan. The romantic comedy will be directed by David Dhawan under the production banner of Pooja Entertainment. The film, which is the first collaboration of Sara and Varun, is slated to release on May 1, 2020. It is a remake of 1995's Govinda and Karisma Kapoor starrer with the same title.