Sara Ali Khan and Kartik Aaryan would be seen romancing in the upcoming movie Love Aaj Kal. Recently, Kartik shared a picture of the duo with a unique twist

Sara Ali Khan is currently gearing up for the upcoming movie Love Aaj Kal. The actor would be seen alongside Kartik Aaryan in the lead role. In the recent past, the filmmakers of Love Aaj Kal created much anticipation among the audience by launching the trailer of the movie. However, there was one dialogue by Sara Ali Khan that inspired several memes.

Kartik Aaryan shared an Instagram story in which Kartik and Sara are seen sitting on a couch. Kartik Aaryan is seen posing with a weird facial expression while Sara is captured in the middle of a conversation with someone.

The picture explains that maybe Kartik is frustrated with Sara for continuously speaking as he captioned the whole picture with words, ‘Mujhe tang kar rahi ho’. These words sound the same as that of Sara Ali Khan’s dialogue in the movie Love Aaj Kal. Kartik Aaryan is seen in a casual look as he wore a white graphic T-shirt, denim and a bomber jacket. On the other hand, Sara Ali Khan is seen pulling off an ethnic look in white attire. 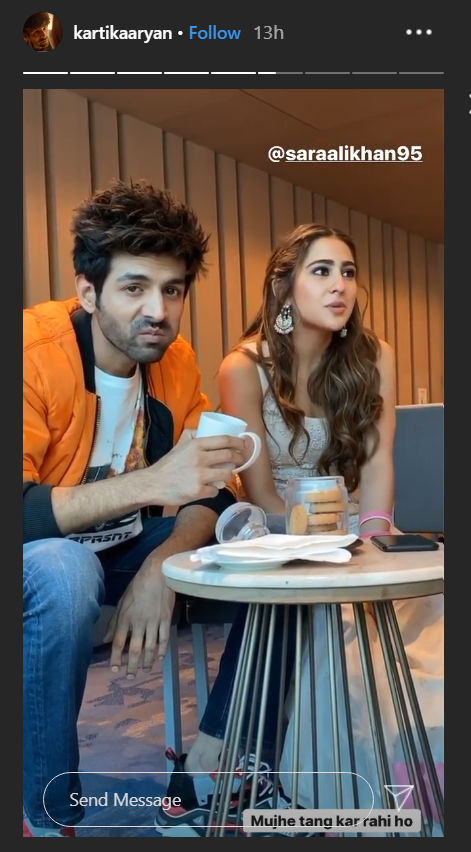 About the movie Love Aaj Kal

Love Aaj Kal is helmed by Imtiaz Ali and stars Randeep Hooda and Arushi Sharma in pivotal roles and is slated to release on February 14, 2020. The story revolves around two kinds of love, one being the classic 90's love affair while the other is that of modern times.