Anjali Barot, who is best known for her portrayal in Scam 1992, recently celebrated her bachelorette party. She took to her Insta and shared pics of the same.

Scam 1992 fame Anjali Barot is all set to tie the knot with beau Gaurav Arora on February 16, Tuesday. On Feb 11, the actor took to her Instagram handle and shared sneak-peeks into her bachelorette party. Sharing the glimpses on social media, Anjali Barot wrote, "Bachelor-Ate 🐰 #bestbridesmaids" as the caption. In the Instagram post, Anjali Barot shared pictures with her friends and bridesmaids, who seemingly planned and executed the bachelorette. The small get-together was hosted on a terrace. The open venue was decorated with fairy lights and balloons.

The actor stunned in a baby pink outfit for her party and struck a pose near the balloons that read "Bride to be". They also got a red velvet cake for Anjali. Amid all Anjali's bridesmaids, you can also spot one of her 'cutest' bridesmaids, Nived. Talking about the latter, Anjali said, "@nived_riak being the cutest bridesmaid in town!". Check out Anjali Barot's bachelorette party pictures.

Several fans and followers of Anjali Barot commented on her pictures. Celebrities like Deepti Sati added, "Omggggg ...... Congratulations sundariii". One of the users wrote, "You'll be Beautiful and Cute Bride", while another added, "So happy for you!". A fan commented, "Whattttt??? Reallyyyyyyy???? Congratulations anjalieeeeee" on Anjali Barot's bachelorette party pictures. Another fan reaction read as "congratulations wish you a beautiful journey filled with lots of love peace and happiness". Check out more reactions below. 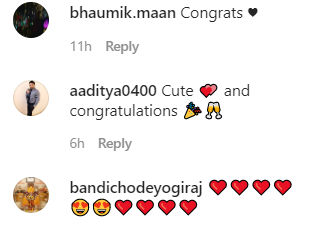 On Feb 10, Anjali Barot announced the exciting news of her wedding. She took to her Instagram handle and shared pictures with her fiancee. Anjali Barot's fiancee, Gaurav Arora is a Multimedia Mercenary. In this Instagram post, Anjali and Gaurav wore black tee-shirts that read as "Risk Hai Toh Ishq Hai", paired with blue denim pants. Sharing these pictures on social media, Anjali Barot wrote, "16th February 2021 #BohotKuchHotaHai". Check out the Instagram post below.