Shahid Kapoor turns 39 today, on February 25, 2020. The actor is seen in a picture posted by his wife Mira Rajput. Check out the picture and adorable caption.

Shahid Kapoor was born on February 25, 1981, and he celebrates his 39th birthday today. The actor is currently busy shooting for his next, Jersey, in Chandigarh. However, he was seen taking some time out for his family, who flew to his shooting location. Mira Rajput Kapoor, Shahid’s wife, shared a cute picture of the two with an adorable caption. Read to know more.

Shahid Kapoor has been occupied with his film’s schedule and even mentioned in an interview that he did not want to take a break. However, he took some time off to celebrate his birthday with his close ones. Mira Rajput Kapoor, who has more than 2 million followers on her social media handle Instagram, shared a picture of herself with hubby Shahid. In the picture, the Kabir Singh actor looked a bit tired but smiling with his wife on her side. Mira wrote “Happy Birthday to the love of my life” on the picture. Take a look at it below. 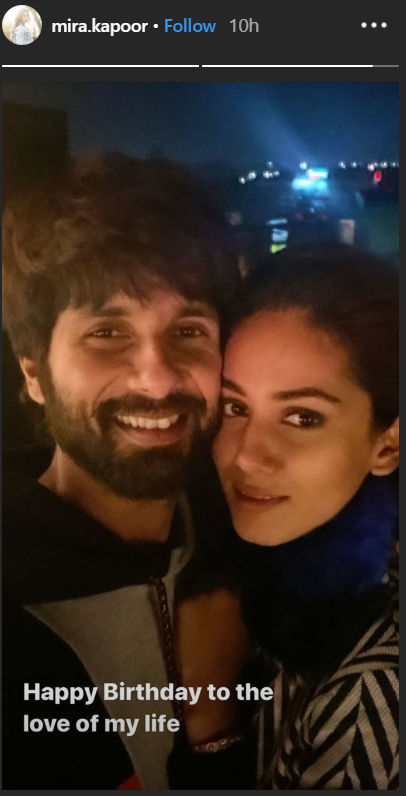 Earlier in a video shared by one of Shahid Kapoor’s fan, he is seen cutting a cake. In the video, Shahid is wearing a black hoodie with an orange and white patch. Mira appears in a grey top and wore a monochrome jacket over it. Mira steals a glance at the birthday boy as he cuts the cake and his dad Pankaj Kapur can be seen cheering Shahid.

Mira Is So In Love With Shahid 😍😍♥️♥️ nd I'm loving it 😍🙌😘
She is literally trying to take glimpse of @shahidkapoor whenever she could 🙊😘
Fangirling 🙊😂😂♥️#HappyBirthdayShahidKapoor #ShahidKapoor pic.twitter.com/nyR6C7O0H3

Shahid Kapoor’s half-brother Ishaan Khatter also wished his big brother. Ishan, who has 1 million+ followers on the social media platform Instagram, posted three pictures of Shahid. He appears with Shahid in the last picture. See his post below.

Shahid Kapoor was last seen in Kabir Singh, along with Kiara Advani, which went to become a blockbuster at the box office. His next venture is Jersey, a sports drama film directed by Gowtham Tinnanuri. It is an official remake of the 2019 Telugu film with the same name. The film also stars Mrunal Thakur and Pankaj Kapoor. Jersey is scheduled to release in August 2020.