Shahid Kapoor took to social media to pray for Uttarakhand people after glacier burst on February 7. He called it a 'beautiful state with wonderful people'.

A number of Bollywood actors took to their social media handles after the glacier burst incident at the Chamoli district in Uttarakhand. On Monday, February 8, Shahid Kapoor took to his Instagram story to share prayers for all those who suffered in the calamity and also mentioned how he has shot for his films in the beautiful state a number of times. Take a look at his post here.

On Sunday, February 7, 2021, the Chamoli valley of Uttarakhand faced a major calamity in the form of a glacier burst causing damage to the Rishi Ganga Dam at the Alaknanda River. Many lives were endangered as workers were in a critical state until the ITBP personnel made it to the spot and rescued them. A huge number of people have gone missing following the catastrophe; while many around the country are praying for those affected, Shahid Kapoor was also one of them.

The actor took to social media handle to offer prayers for those affected by the calamity. The actor mentioned in his message that the state is beautiful and has some of the most wonderful people staying there, while he also added having filmed there quite a number of times which includes his movies Batti Gul Meter Chalu and Jersey. He wrote, "Prayers for all those affected in Uttarakhand. A beautiful state with wonderful people. Have shot there many times”. 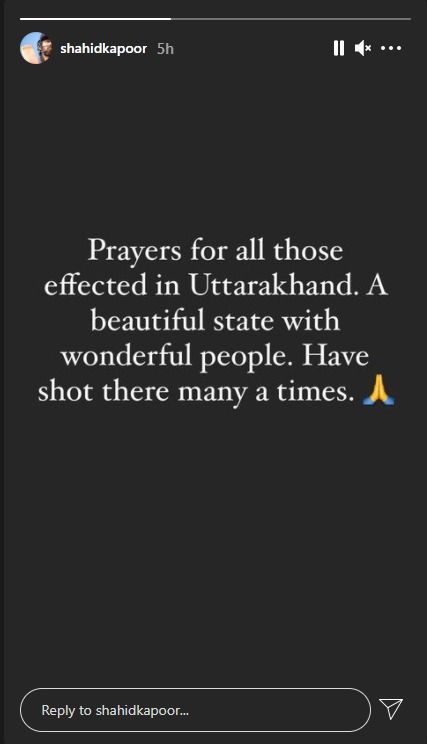 Prayers for all those effected in Uttarakhand. A beautiful state with wonderful people. Have shot there many a times. ðŸ™

The terrible disaster has shaken the lives of the residents living in the valley with a great number of houses and other structures being destroyed by the glacier burst. As of now, search and rescue missions are underway in the region and over 150 people are reported missing after the tragedy hit the Chamoli district’s Tapovan region in the Garhwal Himalayas. Prior to this, Kareena Kapoor Khan, Sara Ali Khan, Ajay Devgn and Akshay Kumar among others took to their social media handles and prayed for the well-being of the state and people affected by the calamity.