Shahid Kapoor Puts Up A Post Full Of Love For Father Pankaj Kapur, Congratulates Him

Shahid Kapoor recently congratulated his father Pankaj Kapur through an Instagram story post. Have a look at the picture that he put up here. All details inside

Shahid Kapoor recently posted a picture with father Pankaj Kapur, wishing him for his most recent achievement. He has also put up the tag “Dr.” along with his father’s name as he just got a doctorate degree. The post has been winning the internet as people love the father-son duo.

Shahid Kapoor recently put up a picture of his father on his official Instagram story. He has also congratulated his father on getting the doctorate degree in the post. In the picture posted, Pankaj Kapoor can be seen wearing a graduation robe. The same picture was also shared by Shahid Kapoor’s wife Mira Rajput Kapoor. Have a look at their posts here. 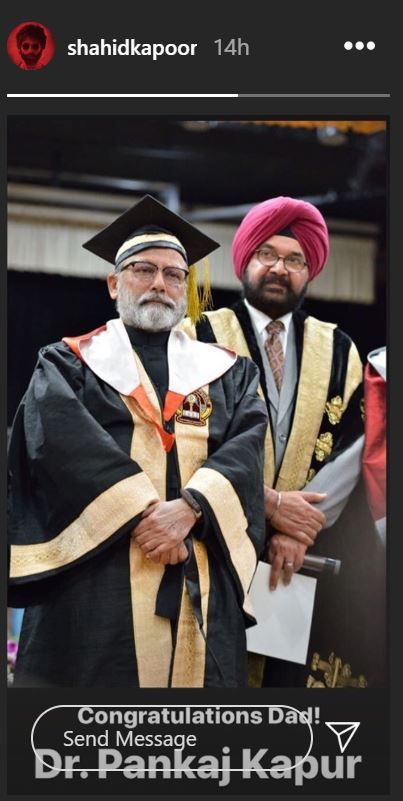 Shahid Kapoor and Pankaj Kapoor share a very special bond. They have worked together on various projects. They were seen sharing screen space in the 2015 film Shaandar. Shahid Kapoor has also worked in a film directed by Pankaj Kapur in the year 2011, which was called Mausam.

The two actors will be seen together again as mentor and pupil in the upcoming film, Jersey. Have a look at a scene from the upcoming film here. The film is based on a cricket player and his journey. It is basically a Bollywood remake of a Telugu film with the same title.

PEOPLE HAVE PLEDGED SO FAR
When Hrithik Roshan shared his philosophy of fitness and said 'it requires discipline'
Sonam Kapoor turns hairstylist for husband Anand Ahuja amid lockdown
Taapsee Pannu opens up about living with OCD & how is she coping up amidst lockdown
Bhumi Pednekar's 5 PM routine truly encapsulates the mood of Coronavirus lockdown
Kartik Aaryan is enjoying every bit of being with family amid lockdown; here's why
DO NOT MISS
LOCKDOWN TO BE LIFTED IN PHASES?
BMC MAKES WEARING MASKS MANDATORY
DECISION ON LOCKDOWN EXTENSION
UP TO SEAL 15 DISTRICTS
CONG SINGHVI ON COVID-19 LOCKDOWN
MAN THRASHED BY MINISTER'S GOONS