Shahid Kapoor Shares A Powerful Message With An Insightful Post

Shahid Kapoor on Thursday went on to express some kind yet powerful words as she shared a post on his social media handle. Check out the pic here.

Shahid Kapoor, on Thursday, went on to share some kind yet powerful words as he shared a post on his Instagram handle. The actor recently shared a powerful message about some words of wisdom on believing in one’s self. The picture reads, “A bar of iron only cost $5. When made into horseshoes its worth is $50. Made into needles its worth is $3500. Made into balance springs for your watches its worth is $300,000. Your own value is determined by what you are able to make of yourself.” Check out the insightful post shared by Shahid Kapoor below. 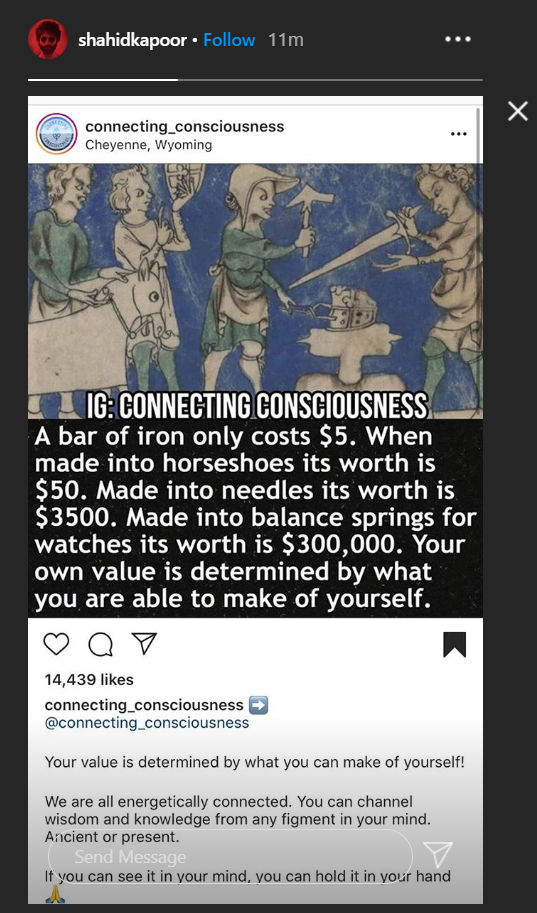 Also read | Unseen Pic Of The Day: Shahid Kapoor Looked Cute As A Button In Childhood And Here's Proof

The actor is quite active on social media and he keeps updating fans about his time during the lockdown. As seen in his posts, the actor loves sharing many of throwback pictures from his various shoots. Shahid Kapoor recently shared a stunning picture on his Instagram handle where he can be seen giving fans a glimpse of his sculpted body.

Seeing this picture, fans could not keep calm and went gaga over it. Fans went on to comment saying, “sexy,” “can’t take my eyes off,” “amazing” and much more. Check out the post below.

Shahid Kapoor was last seen in the Sandeep Reddy Vanga’s hit film Kabir Singh alongside Kiara Advani. The film was a remake of a Telugu hit film that released in 2017 titled, Arjun Reddy. The plot revolved around a short-tempered doctor who got into drugs and alcohol when his lover was forced to marry somebody else.

Shahid Kapoor will next be seen sharing screen space with Mrunal Thakur in the film Jersey. The movie is being helmed by Gowtam Tinnanuri and is considered to be one of the much-awaited films of 2020. The film is a remake of the 2019 Telugu film with the same name.

The film is expected to release on August 28, 2020, but due to the given condition, the film might get pushed for another release date. However, no official reports have been received from the makers of the film. Shahid Kapoor is currently spending time with his wife and kids during the lockdown.

PEOPLE HAVE PLEDGED SO FAR
LATEST NEWS
View all
8 hours ago
Directors Abbas & Mustan talk about 'Khiladi Kumar', theatre-OTT debate & the times ahead
12 hours ago
Tamannaah Bhatia makes a statement with 'All Lives Matter' post, receives mixed reactions
9 hours ago
200 Idli vendors honour Sonu Sood with 'aarti' as he sends them to Tamil Nadu from Mumbai
12 hours ago
Radhika Apte shares mystifying teaser of her first directorial venture 'The Sleepwalkers'
12 hours ago
Akshay Kumar Quiz: How well do fans know Khiladi Kumar? Answers inside