Shahid Kapoor recently took to Instagram to answer a bunch of questions asked by his fans on social media. When asked about Kiara Advani, he turned Kabir Singh

All the Kabir Singh fans might surely remember one of the most popular dialogues of Shahid Kapoor from the film, "Kisne touch kia usko" as Preeti Sikka, played by Kiara Advani, was harassed during Holi in the film. Recently, Shahid Kapoor took to his Instagram handle for a Q&A session with fans, wherein he answered a bunch of questions. However, when Kapoor was asked about his co-actor Kiara Advani, he decided to respond in a Kabir Singh style.

Due to the Coronavirus outbreak, everyone has resorted to social distancing and self-isolation to help prevent the spread of the deadly virus. Everyone, including Bollywood celebrities are trying to indulge in various activities to kill time and Shahid Kapoor decided to interact with his fans on social media. Kapoor answered a bunch of questions asked by his fans on Instagram.

However, when asked about his co-actor Kiara Advani, Kapoor decided to channel the inner Kabir Singh. One of his fans asked him for his view about Kiara Advani in one word. Therefore, he jokingly responded with one of the dialogues from Kabir Singh, i.e. "Kisne touch kia". 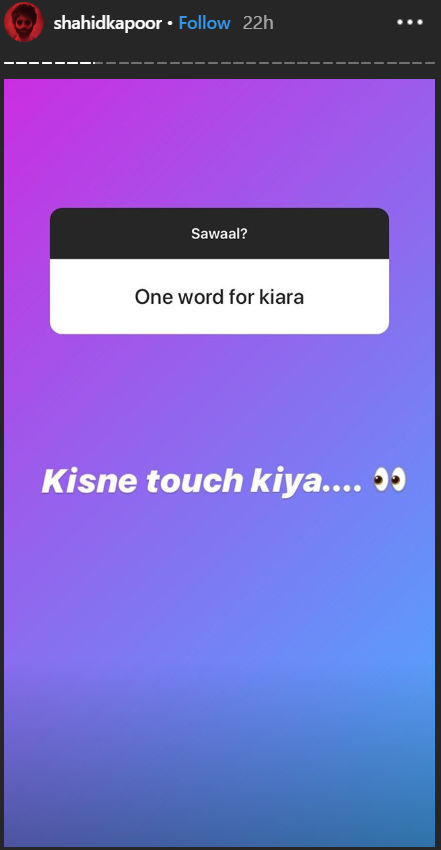 This iconic dialogue from the film became fodder for memes across the country and went viral. Shahid Kapoor's role in Kabir Singh received mixed reactions from the audiences, but did exceedingly well at the box office. The film managed to gross over ₹379 crores at the box office worldwide and went on to become a blockbuster hit of 2019. The film is now available on Netflix for everyone to watch.

Also Read | Fan Asks Shahid Kapoor If He Is Bored Of 'quarantine'; Actor Has The Best Response

Also Read | Shahid Kapoor Hosts A Q&A With Fans, Reveals He Wants To Do More Films Like 'Kabir Singh'