Shanaya Kapoor Gets A Surprise From Father Sanjay Kapoor, See What It Was

Shanaya Kapoor took to Instagram to show her fans and followers the surprise her father Sanjay Kapoor gave her. Read ahead to know more.

Sanjay Kapoor's daughter Shanaya Kapoor recently made her Instagram account public and has been letting her fans and followers know of her whereabouts ever since. Recently, she took to Instagram to share a picture of the surprise she got from her father. Scroll to see what surprise Shanaya Kapoor's father gave her.

In the picture shared by Shanaya, she is seen kneeling beside some boxes of Wai Wai noodles. She is all smiles for the camera and is pointing at the boxes as well. She is seen wearing a white tee-shirt and a pair of shorts. In the caption of the photo she wrote, 'No one comes closer. #waiwaibaby (thanks dad for the surprise)'. She shared a picture of the cooked noodles as well.

Shanaya's photo garnered over 64K likes within hours of uploading and is still counting. Several of her fans and followers have commented that they love the noodles as well. One user also recommended Shanaya to try out a different flavour of the noodles as well. See their reactions below: 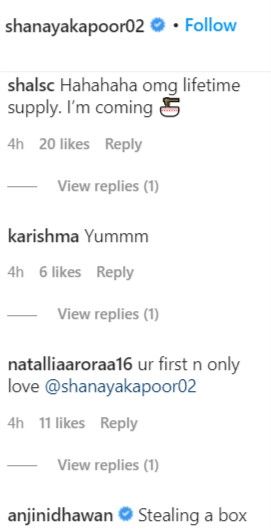 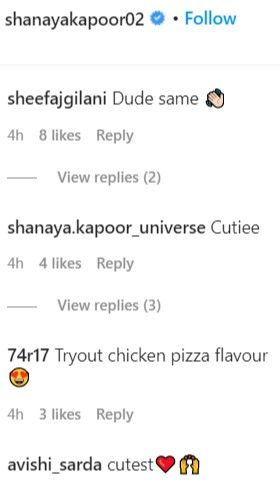 Shanaya Kapoor's Instagram gives a sneak-peek into her life. She often shares pictures with her family and pet dog on Instagram. Shanaya Kapoor's Instagram also sees a lot of her gorgeous pictures from her photoshoots. Earlier to this, she shared a video of the behind-the-scenes from her dance rehearsals videos. The video is the compilation of the time she forgot her steps while dancing or burst out laughing in the middle of dancing. She was also seen performing classical dance in the video. In the background of the video, Pritam and Nikhil Paul George's song Main Kya Karun is heard to be playing.

She made her screen debut on the Netflix's show The Fabulous Lives of Bollywood Wives. Her mother Maheep is one of the leads on the show. She appeared in the section where her debut at the debutante ball and fashion event Le Bal in Paris was shown. She is seen dancing with her father Sanjay Kapoor. Shanaya has been the assistant director on the sets of Gunjan Saxena: The Kargil Girl which starred Janhvi Kapoor.