Shanaya Kapoor looks charming in her white oversized hoodie outfit and her look was styled by her cousin and Bollywood actor Arjun Kapoor. See post here.

Daughter of Bollywood actor Sanjay Kapoor and Jewelry designer Maheep Kapoor, Shanaya Kapoor made her Bollywood debut with the 2020 Netflix film Gunjan Saxena: The Kargil Girl as an assistant director, which featured her cousin Janvi Kapoor in the lead role. Shanaya Kapoor’s new look in a hoodie recently created a frenzy among fans because it was styled by none other than her cousin and Bollywood actor Arjun Kapoor!

Also Read: 5 Things We Learnt About Shanaya Kapoor After She Made Her Instagram Public

Shanaya Kapoor took to Instagram on March 3 to share pictures of her new look. She had donned a white oversized branded hoodie from Justin Bieber’s Drew House collection. She paired her outfit with colourful sneakers and accessorized it with a pair of small hooped earrings. She had let her hair down and wore red lipstick with minimal makeup. In the caption, the star kid explained how her family had helped her style it. She gave credits to Arjun Kapoor for styling her outfit, her brother Jahaan Kapoor for clicking the photos, and her cousin Khushi Kapoor for using her editing skills to render photos. She wrote in the caption: “Styled by @arjunkapoor  clicked by: @jahaankapoor26 edited by @khushi05k hehe  #famjam”. Check out Shanaya Kapoor's photos here-

Fans react to the outfit

Shanaya Kapoor’s followers were in awe of her dope outfit and the cousin’s teamwork. Her followers left compliments like “looking so beautiful”, “cute”, “looking stunning” and one even wrote “cute sibling teamwork” and many added red hearts, fire, clapping hands, heart eyes in the comment section. Khushi Kapoor wrote “And edited by @khushi05k” after which  Shanaya edited the caption to give her credits. Read comments here: 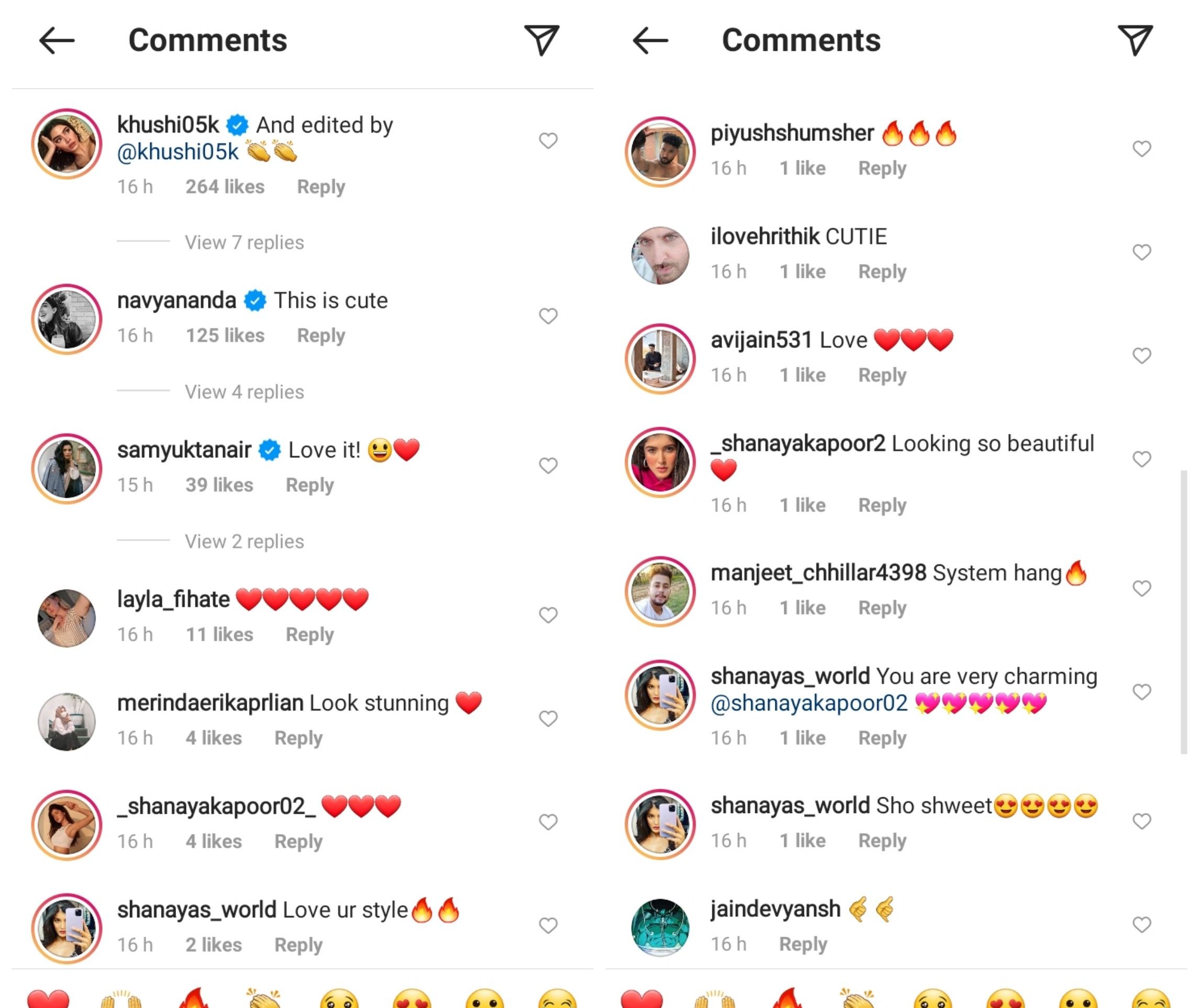 Shanaya Kapoor may have not worked much in Indian cinema but the talented star kid has already garnered a good fan following because of her dancing skills and her photoshoots in stylish avatars. She is a skilled belly dancer and has treated her Instafam with her dancing videos and BTS videos many times. Five days ago, she added a reel video in which she flaunted her dance skills with her instructor Yash Kadam. She was seen dancing to the same song with two different dance styles. The fourteen seconds video alone caused a frenzy in the comments with many complimenting her dance skills and one even wrote “Step up 8- straight outta Bom city”. Check out the post and comments here: 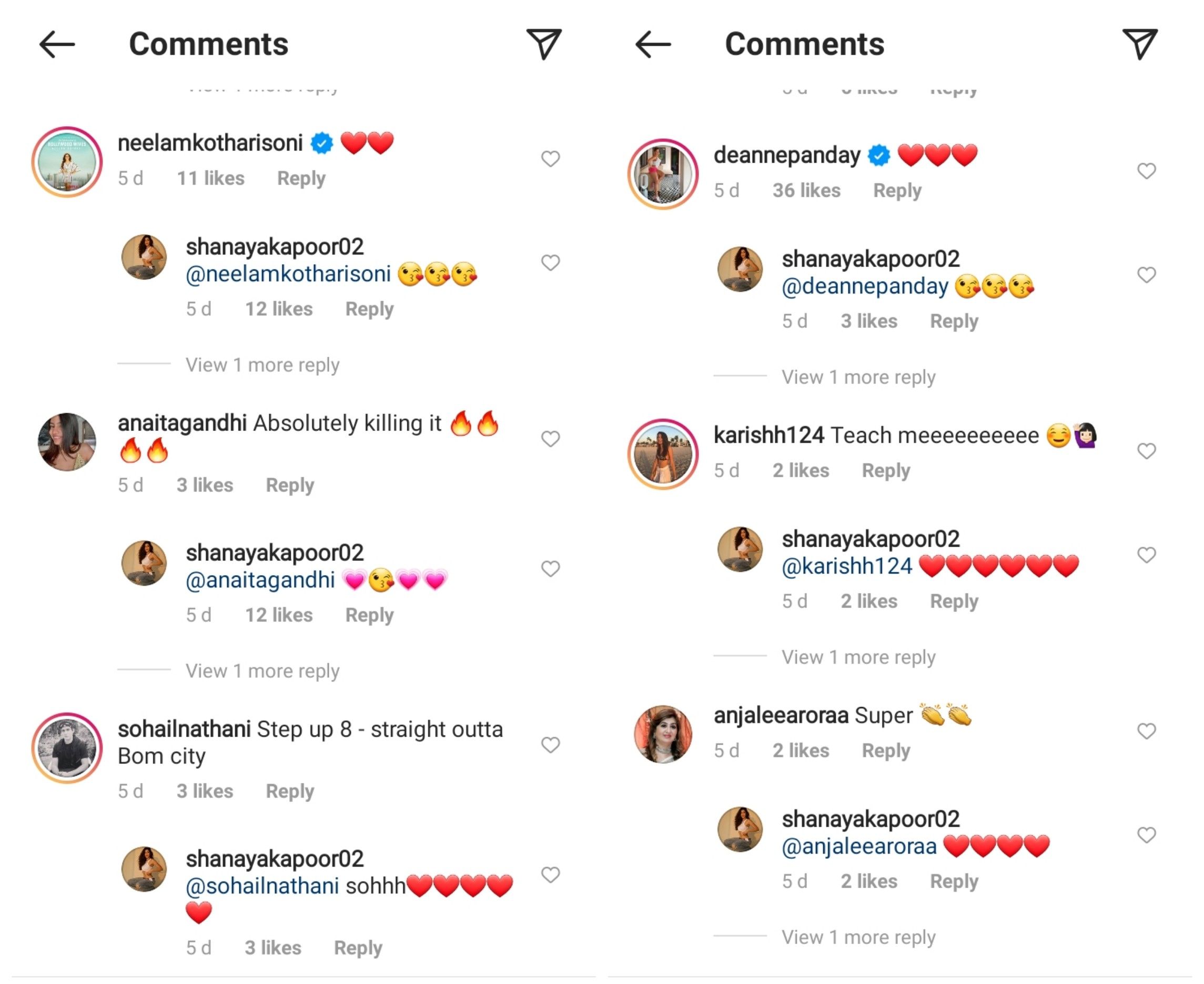 Also Read: Shanaya Kapoor Gets A Surprise From Father Sanjay Kapoor, See What It Was