Siddhant Chaturvedi recently posted an unusual picture of himself. Here is a look at what Deepika Padukone had to say about the post. Read for details.

Siddhant Chaturvedi recently uploaded an unusual picture of himself on his social media handle. Deepika Padukone had the most laud worthy comment for the picture. She created a pun which was just apt for the picture posted.

Siddhant Chaturvedi of Gully Boy fame recently uploaded a not-so-usual picture of himself. In the picture posted, he can be seen posing in a cup of green tea. He can be spotted wearing a completely green outfit while he floated in a transparent cup. He was also wearing a hat and a jacket in the picture posted. Considering the weird edit, he asked his followers to caption the picture, suggesting that he wanted his fans to get creative with it. One of the many people to comment on the post has been Deepika Padukone. She decided to get creative as she made a pun out of his name. She had written Siddhant CharurveTea. Have a look at the post and the comment on it here. 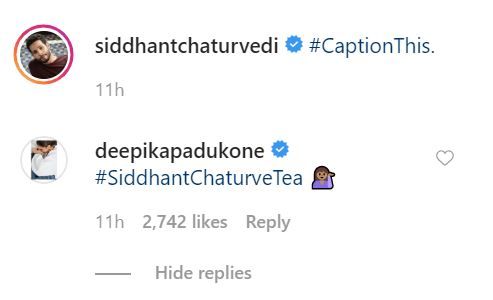 Siddhant Chaturvedi also carried the joke forward as he replied to Deepika’s comment. Have a look at the reply here.

Siddhant Chaturvedi is all set to be seen in a film opposite actor Deepika Padukone. The film will also star actor Ananya Panday and is expected to be a modern love story. The untitled film is being directed by Shakun Batra and produced by Karan Johar under his banner, Dharma Productions.

A post shared by Siddhant Chaturvedi (@siddhantchaturvedi) on Feb 7, 2020 at 6:52am PST

Read From Siddhant Chaturvedi To Akshay Kumar; List Of B-town Stars Who Became Actors By Chance