Bollywood celebrity Siddhant Kapoor took to his social media handle and shared a video, in which he sang a song of Bryan Adams while recalling an old memory

Bollywood actor Shakti Kapoor's son and actor Siddhant Kapoor took to his social media handle and shared a video in which he can be heard singing a Bryan Adams song, on Monday. Interestingly, he sang the song titled Heaven from the album Reckless. Siddhant voiced the two opening para of the song. While captioning his short video-post, Kapoor wrote, "Who likes Bryan Adams ? I use to sing this song for my girl friend in school", along with a laughing and a black-heart emoticon. Scroll down to watch the video.

Within a couple of hours, the video post of the Haseena Parker actor received an overwhelming response on the photo-video sharing platform. A section of his followers took to the comments section and praised Kapoor. A friend of Siddhant proclaimed that the former should be honored with a Grammy right away while another asserted, "Awww, this is so sweet", along with a heart-eye and red-heart emoji.

READ | As Siddhant Kapoor Quarantines In Goa, Fans Wish Him A Speedy Recovery

On the other hand, Jannat fame Sonal Chauhan wrote, "One of my most favourite songs ever. Love Bryan Adams". Ira Dubey and Pranutan Bahl too jumped in the comments box. Ira dropped a fire emoticon while Pranutan recalled the other "classics" she grew up listening to. 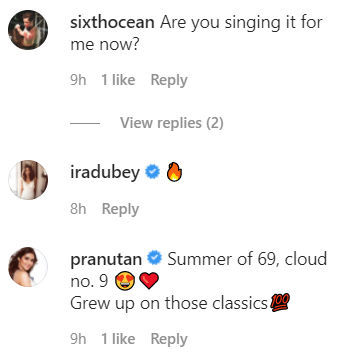 Interestingly, the current relationship status of the Bhaukaal actor is not public. However, in 2016 he broke up with his longtime-girlfriend model Erica Packard. Tt was speculated that the couple had exchanged rings in 2014. Later, they parted ways. To keep his personal life and break-up with Erica a private affair, Siddhant never commented about it.

On the other hand, a few weeks back, Kapoor had tested COVID-19 positive and was isolating in Goa. During his self-isolation in Goa, he posted a rant on Instagram about 'Karma' being a boomerang. The tone of his note-post seemed quite stern and it appeared as if he is upset about someone or something. He asked, 'where is the love, where is the change and why can't people mind their own business'.