Sonakshi Sinha's Photos With Celebs Prove That She Loves Socialising

Bollywood actor Sonakshi Sinha is known for her stunning Instagram posts. Check out some of her posts that show how she loves socialising with Bollywood celebs.

Sonakshi Sinha is a Bollywood actor who is known for her versatile acting as well as her stunning Instagram posts. She is friends with many Bollywood celebrities like Salman Khan and is often seen in many of their parties as well. Check out some of Sona's posts from her official Instagram handle which prove that she loves to socialise.

Actor Sonakshi Sinha bagged herself a role in Reema Kagti directed web series. The series is slated to air on Amazon Prime. Recently, she shared an Instagram post with her team which also included Vijay Varma and Gulshan Devaiah. Sonakshi Sinha can be seen supremely happy while posing for this 'team bonding' post since it is her first time working in a web series as well as her first time working with Reema Kagti, known for the Aamir Khan starrer Talash: The Answer Lies Within and Akshay Kumar starrer Gold.

Kareena Kapoor Khan invited Sonakshi Sinha as a guest on her radio show What Women Want. During the show, the two leading ladies took a moment to take a selfie together. Sonakshi and Kareena talked about how important it was for women to be independent in the modern world. 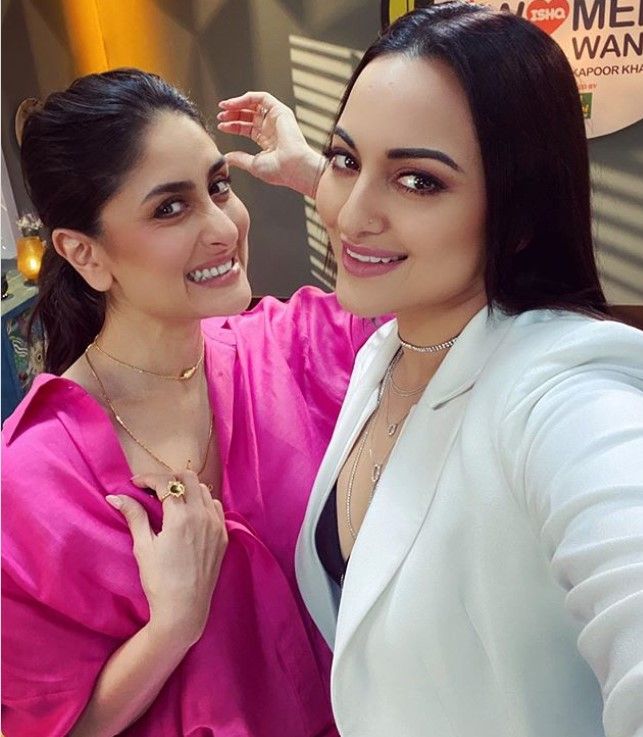 Sonakshi Sinha took a pic with the celebrity kids including Malaika Arora's son Arhaan Khan, Sohail Khan's son Nirvana Khan and Kubair Gunjalkar at a family gathering. She labelled the three of them as 'my boys' when they clicked a picture.

Sonakshi Sinha's pic with the Khans

Sonakshi Sinha beamed with happiness when she posed alongside both the acclaimed Khans from the Hindi film industry. She could be seen posing with Shahrukh and Salman Khan during Salman's birthday party last year.

Sonakshi Sinha and Kusha Kapila met on the sets of Fashion Superstar and instantly shared an Instagram video where Kusha as Zulmi Aunty can be seen troubling Sonakshi Sinha. Kusha Kapila is a social media influencer who was one of the guests on the show.

Sonakshi Sinha, Badshah and Varun Sharma attempted their version of the Koka challenge sitting inside a car. This video was taken when Sona's movie Khandaani Shafakhana was about to release.

ALSO READ| Sonakshi Sinha Vs Kajol In An Anita Dongre Outfit: Which Actor Slayed The Look?

PEOPLE HAVE PLEDGED SO FAR
LATEST NEWS
View all
8 hours ago
Athiya appalled by Kerala elephant's death, says "They think we are cute. We failed them"
9 hours ago
Shruti Seth's fitness routine amid lockdown is super motivational; Watch
8 hours ago
Kartik Aaryan reveals why he wants to marry a girl like Deepika Padukone; Read here