Sonakshi Sinha suggests Zaheer Iqbal should not shave after he asks his fans whether he should shave his beard or not with a throwback on Instagram.

While celebrities are stuck home amid lockdown, they are interacting with one another and their fans online and conversing with them. During the lockdown, the Notebook actor Zaheer Iqbal was also seen interacting with his fans. In one of his latest post, he asked his fan on where he should have a clean shave or not. After the post was shared, Sonakshi Sinha commented on the post. Here is what Sonakshi Sinha had to tell Zaheer Iqbal.

Zaheer Iqbal took to his Instagram on April 21, 2020, and shared a selfie of him in a clean shaved avatar. He was seen in a vest in the picture and was seen asking his fans where he should go back to his clean shaved look. Here is how he captioned the picture "Kar doon clean shave?". Take a look at the post

After Zaheer posted the picture, Dabangg actor Sonakshi Sinha took to the comment section of the picture and told Zaheer not to shave his beard. She wrote, "Ummmmm.... no." It seems like Sonakshi is unhappy with Zaheer's clean shaved look and does not want him to change the way he looks now. 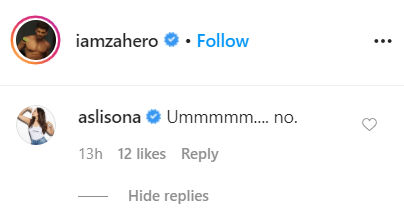 Read Also | Sonakshi Sinha's Songs That Have Received Maximum Views On YouTube | Can You Guess?

It is rumoured that Sonakshi Sinha and Zaheer Iqbal are seeing each other and are dating. It was reported that while Sonakshi was promoting her film Kalank, she was asked on whether she was dating Zaheer. She dodged the question smartly and avoided answering it, but making comments like this on Zaheer's posts surely suggest that they are close. Both have been denying the rumours, but small things like these have made fans think otherwise.

PEOPLE HAVE PLEDGED SO FAR
LATEST NEWS
View all
2 hours ago
Raveena Tandon compares her latest pic alongside Sonali Bendre with poster of 'Keemat'
1 hour ago
Esha Gupta deletes all her Instagram posts but keeps one, Read details here
1 hour ago
Aly Goni wishes ex-girlfriend Natasa Stankovic on pregnancy, wedding with Hardik Pandya
6 mins ago
Hardik & Natasa announce pregnancy, Sonu Sood called 'Indian of the Year' & more
3 hours ago
Akshay Kumar worked in many movies that were shot in London; See list here