Sonakshi Sinha recently shared a picture on her social media refreshing some memories from her previously released film Lootera. Read on to know more about it.

Sonakshi Sinha is quite active on social media. The actor has been sharing many social media posts during the lockdown. She recently shared many selfies and videos related to the ongoing coronavirus. The actor also shared an Instagram story where she tagged Ranveer Singh. Take a look at some more details about her latest Instagram story.

Sonakshi Sinha shared the Lootera shoot call sheet where the numbers of specific people were mentioned in the documents. The actor shared her Instagram story with excitement and captioned it with a laughing and heart emojis. There was a lot of information mentioned in the picture like studio timings, how many days will the shoot go on, requirements needed for the shoot, and other details. The actor also tagged Ishika Mohan Motwane on her Instagram story. Ishika Mohan Motwane is Vikramaditya Motwane's wife. 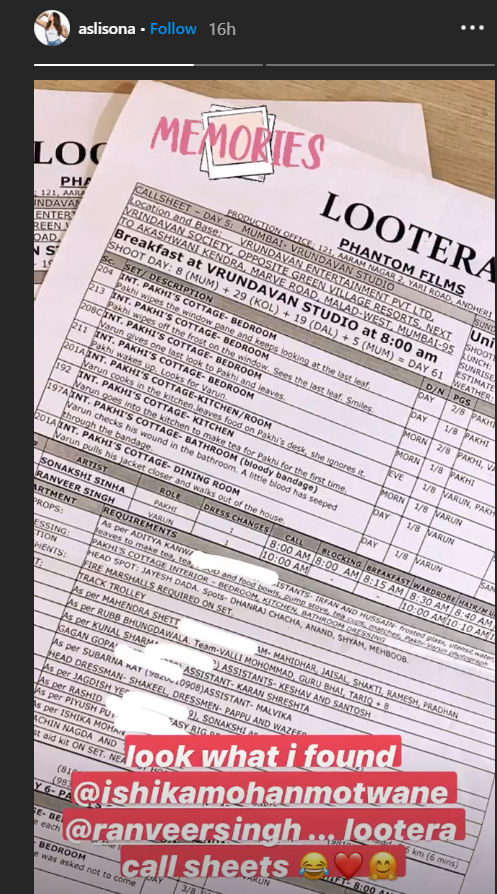 ALSO READ | Sonakshi Sinha's Best Action Films That Should Not Be Missed; From 'Dabangg' To 'Akira'

Vikramaditya Motwane's wife Ishika Mohan Motwane also replied to Sonakshi Sinha's post and captioned her Instagram story as Lootera shoot call sheets with a heart emoji. Vikramaditya Motwane directed the movie Lootera. The film was a box office hit and gained positive reviews. Both Ranveer Singh and Sonakshi Sinha were praised for their performances in the film. 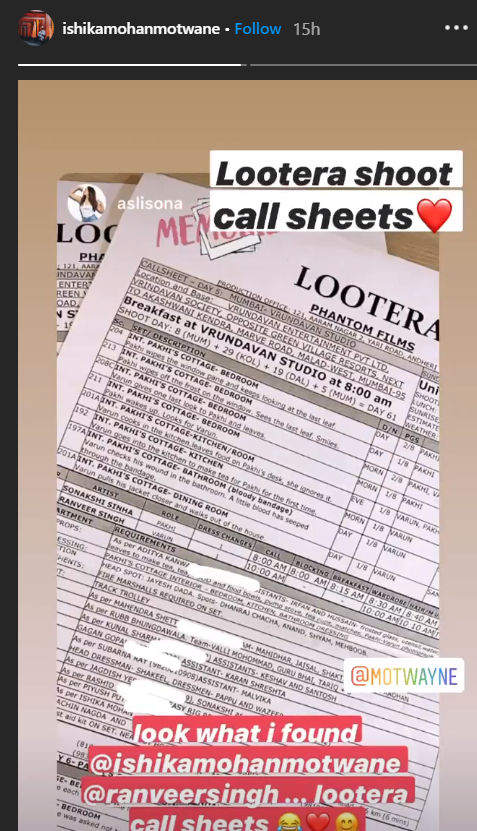 Lootera is an adaption of O.Henry's short story 'The Last Leaf'. Sonakshi Sinha played the role of Pakhi and Ranveer Singh played the role of Varun in the Indian historical romance film. Ranveer Singh's character in the film was created by the director whereas Sonakshi's character was from the book. Ranveer Singh had claimed in an interview that he was not initially convinced with his character in Lootera and had refused to star in the movie. Later on, the actor revealed that after reading the script of the film, he felt confident and rehearsed extensively to nail his role in the film. Not only Ranveer Singh but Sonakshi Sinha had also stated that she also faced difficulties while shooting for the film.