Sonam Kapoor recently shared a heartfelt post talking about what the journey of fulfillment means to her. Read here to know what the actor means by this.

Sonam Kapoor recently took to Instagram to share a monochrome portrait of herself. Along with the picture shared by the actor, she also opened up about the feeling behind this portrait. She wrote saying that this is one of her favourite portraits. She went on to reveal that this portrait was clicked soon after the release of her film, Neerja. The film was considered to be one of the most successful films of her career. But the actor wrote that she not exactly ecstatic after the release of the film, she said: “I was at my most pensive.”

Sonam Kapoor further revealed that after the release of her hit film, Neerja, she went on to take a sabbatical and that is when she found her ‘life partner,’ Anand Ahuja. She further revealed that this picture is a symbol of "crossroads to the journey of fulfillment."  She also said that the journey of fulfillment "doesn’t come with work or a relationship, but it comes with being someone who doesn’t need any of the above to complete them but someone who is inspired by themselves to feel complete." Check out the picture below.

Seeing this picture, many fans went on to cheer the actor and praised her for all her hard work. Among the many comments was her husband, Anand Ahuja’s comment. He went on calling her an 'emotional bunny' and asked her if she is feeling okay. Check out his comment below. 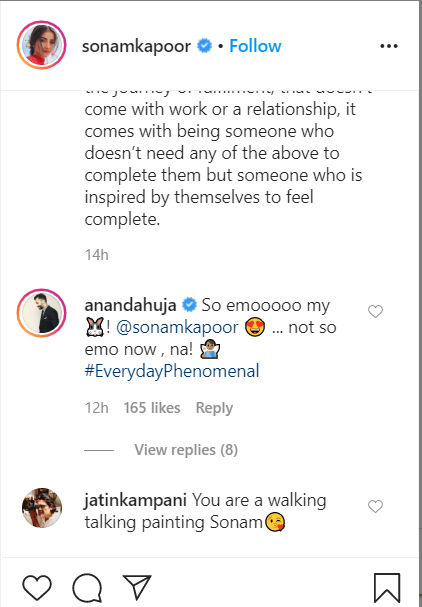 The film is based on a true story of the courageous woman, Neerja Bhanot. The film starred Sonam Kapoor in the titular role. The film also went on to receive the Best Feature Film at the 64th National Film Awards. Sonam Kapoor also won the National Award for her performance in the film.