Sonam Kapoor has a savage reply ready for her friend, Deepika Mehta when she asked about her plans for a baby. Read on to know more about this in details

Sonam Kapoor and Anand Ahuja celebrated their second wedding anniversary a few days ago. For the occasion, Sonam Kapoor took to her social media account and posted a heartfelt note for her husband. She shared another picture of Anand holding a puppy and added a cute caption. But, what grabbed the attention of netizens is a comment by Sonam Kapoor's friend and the actor's savage reply.

Sonam Kapoor on Instagram posted an adorable photo of husband, Anand Ahuja with the caption, "Why is this so cute.. ðŸ˜ @anandahuja @jalan_varun". However, it was Deepika Mehta, Sonam's friend, whose comment grabbed the attention. She asked the couple, "So ready for a baby â¤ï¸ðŸ˜˜â¤ï¸" hinting that Sonam and Anand might be planning for a baby soon.

However, Sonam Kapoor's savage reply seemed to have turned down all hopes. She replied, "@deepikamehtayoga congratulations my darling Deepika! I know you’re happy and fulfilled. All my love".  For the unversed, Deepika Mehta had recently become a mother and Sonam seems to have cleverly turned her question to a statement. Take a look: 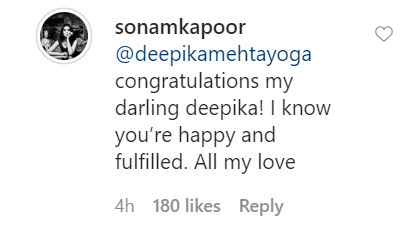 Also Read: Sonam Kapoor's 'Aisha' And Other Romantic Films That Did Not Work At The Box Office

In the other post, Sonam Kapoor penned down a heartfelt appreciation note for "the best husband", Anand Ahuja. She wrote, "Appreciation post for the best husband in the world who handles my emotions like a pro and loves me unconditionally. I love you @anandahuja and I’m so grateful for you. Cc @jalan_varun". Check out here:

Also Read: Sonam Kapoor Gushes Over Anand Ahuja While He Holds A Puppy

In other news, Sonam Kapoor and Anand Ahuja are currently lodging in Delhi. The couple had taken a London trip just before the Coronavirus lockdown and are in self-quarantine. Here's a sneak peek of what they are up to:

PEOPLE HAVE PLEDGED SO FAR
LATEST NEWS
View all
7 hours ago
Pankaj Kapoor's solid net worth is a result of his illustrious career; Check details here
7 hours ago
Deepika Padukone shares family's WhatsApp chat, this is how she has saved Ranveer's number
8 hours ago
Is 'Stree' producer Dinesh Vijan making a film on male virginity?
6 hours ago
Sonu Sood to Dimple Kapadia's first cook for Twinkle, here are the day's top stories
5 hours ago
Can hand-sanitizer catch fire? Amitabh Bachchan shares an experiment video