As Anil Kapoor's film 'Malang' releases on Friday, daughter Sonam Kapoor took to social media to give her best wishes to the team and laud her father's journey.

Bollywood veteran Anil Kapoor has fans all over the world who adore him for his versatile performances as well as for his youthful looks. In fact, Anil Kapoor has one fan who has seen him through all his movies and all his roles- his daughter actor Sonam Kapoor. The Delhi 6 actor took to social media earlier on Friday and posted a heartwarming message for her father by tracing his journey from the 1987 film Mr. India to the 2020 film Malang as she shared stills from both the films.

Mr. India and Malang!🎬
1987 and 2020!
Dad, your timeless appearance, hard work and talent inspires us all! Wishing you and the entire crew of Malang all the very best! @AnilKapoor ❤#UnleashTheMadness #FlashbackFriday pic.twitter.com/ljDlr6pTlo

Anil Kapoor's work in the Hindi film industry is definitely something every young actor looks up to for inspiration. The 63-year-old actor is also known for his undeniable good looks along with the iconic roles that the actor has portrayed over the years. Anil Kapoor is also extremely active on social media and has posted a quirky reply to his daughter Sonam Kapoor's post which featured the actor sitting atop a car in his films, Mr. India and Malang. 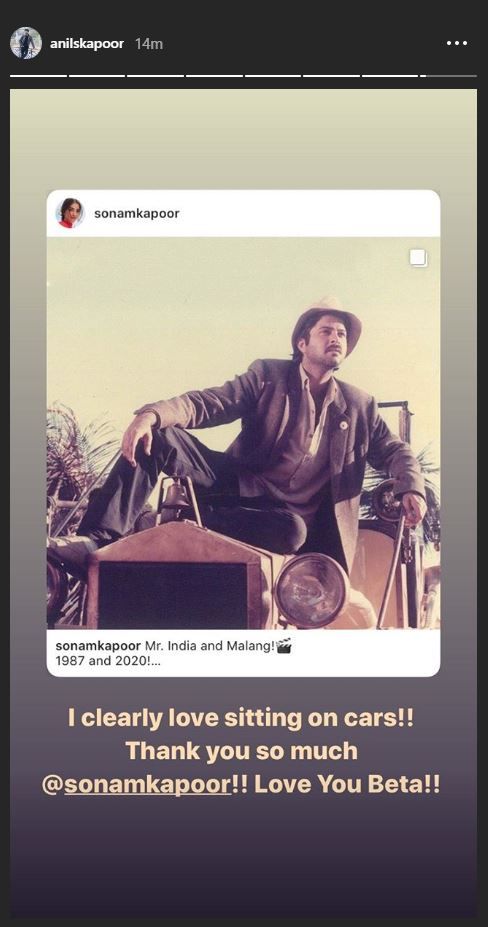 Malang is an action romance movie that is helmed by Ek Tha Villain fame director Mohit Suri. The film stars Aditya Roy Kapur along with Disha Patani, Anil Kapoor and Kunal Kemmu. Anil Kapoor can be seen in a cop avatar in the film. Malang is produced by Luv Ranjan and has hit the theatres on February 7, 2020.