Sonam Kapoor has a trick to drive away sweet craving amidst COVID 19 lockdown. Read on to know her tried and tested method as shared by Rhea Kapoor.

Sisters Sonam Kapoor and Rhea Kapoor are very popular on social media for their sense of style and fashion statements. As the nation has been facing lockdown due to Coronavirus pandemic, celebrities have taken to their social media handles to share with their fans how they are spending their time and have also started sharing some useful tips. One such tip was shared by Rhea Kapoor about how to drive away sweet cravings. Rhea Kapoor revealed that Sonam Kapoor had come up with the trick and they could vouch for it. Read on to know more about it.

Sonam Kapoor's trick to drive away sweet cravings during the lockdown

Rhea Kapoor took to her Instagram account where she posted a great tip for anyone with a sweet tooth. Rhea Kapoor called Sonam a 'snacking extraordinaire' in her post. Rhea told her fans that they can make toast, spread butter on the toast, and drizzle a little honey on it and eat it to drive away their cravings for pancakes or french toast. Sonam Kapoor too posted Rhea Kapoor's story on her Instagram stories. Take a look at the picture below. Rhea Kapoor shared a picture on her Instagram story where she shared with her fans what she had cooked that day. It was a picture of sticky garlic marinara. Check out the picture below. 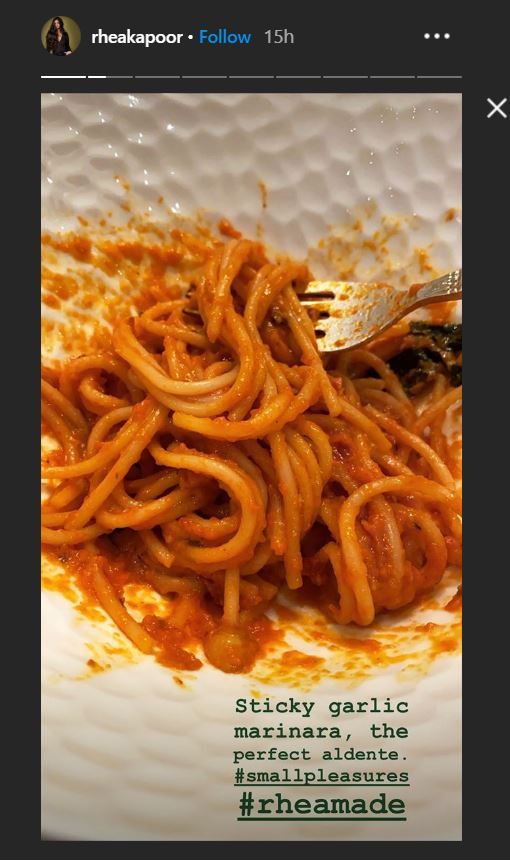